Yet another series that's been sitting in my to do folder for too long. Although it usually takes me a while to pick the shots I'll work on, I found the culling process particularly difficult this time. Stretched over several months, it probably took me as long as it did due to my doubts as to whether my changing selections properly represented this magnificent brutalist building. Unexpectedly, white balancing the images in an attractive yet realistic way was a bit of a challenge as well: my initial (but naive) peace of mind for having what seemed like an ideal white balancing target in almost every frame (i.e., concrete), quickly turned to hair-pulling (and there is a lot less to pull than there used to be) aggravation when realising that this textbook neutral concrete, actually had slightly varying hues, was weathered and lichen covered, and reflected all ambient colours (the blue sky, the yellow-green bushes and trees, the yellow sun, and the reds and tans of the furniture inside). The best-remembered lessons are learnt the hard way, I guess. 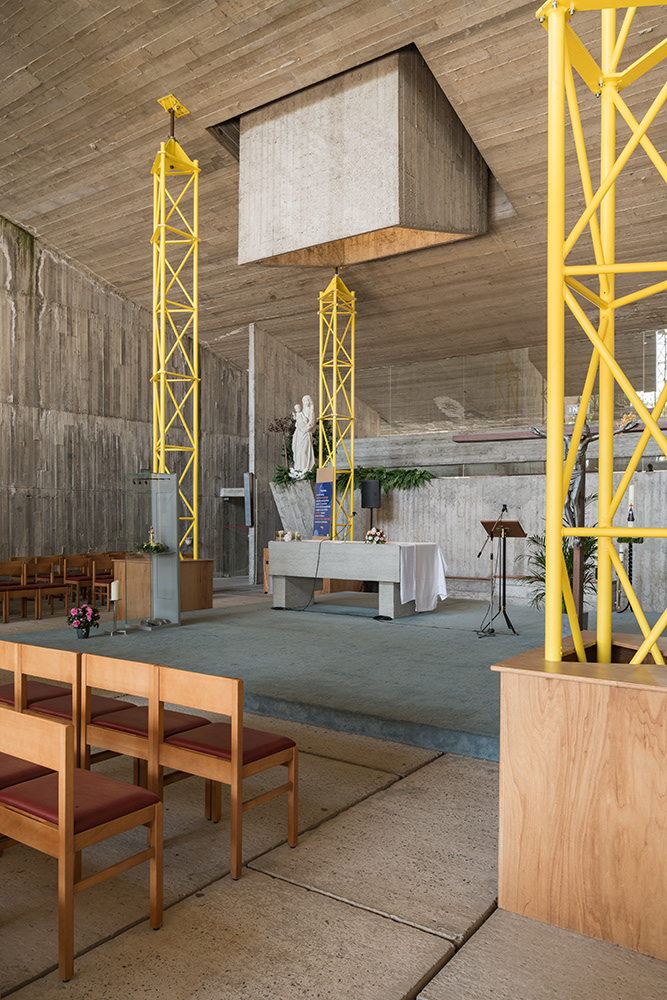 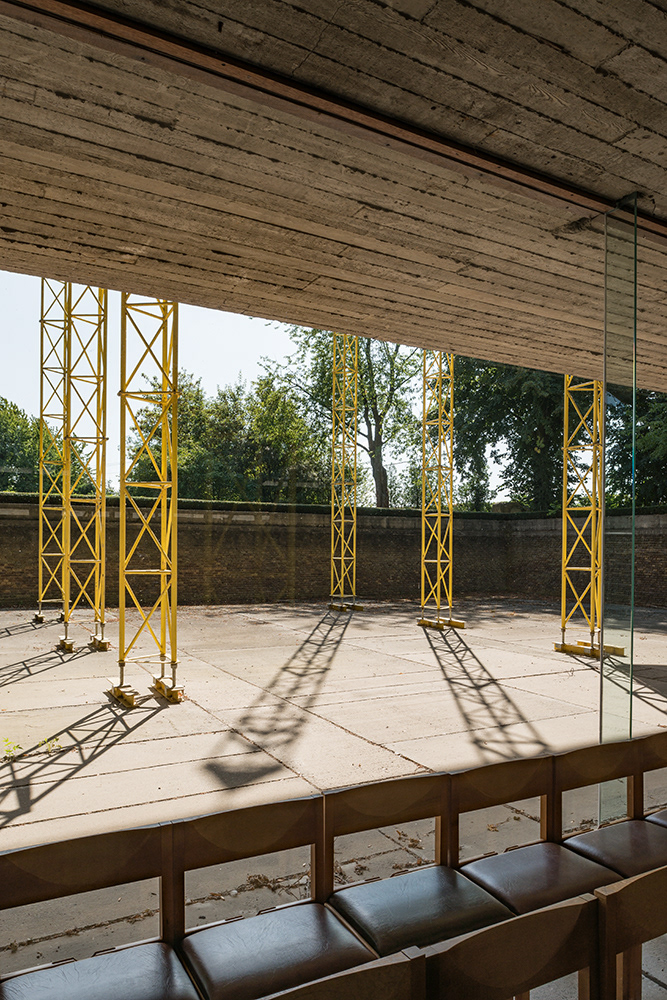 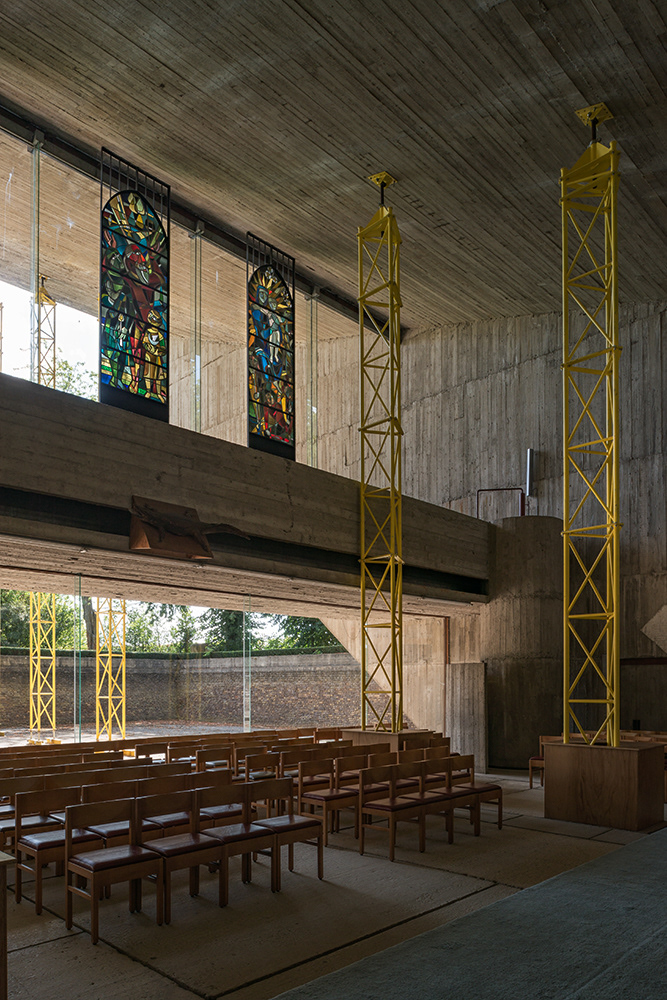 The building can be found in the wider Oudenaarde area, more specifically in Kerselare, a hamlet in the village of Edelare, and is actually a place of pilgrimage. The chapel was designed by Juliaan Lampens, and dates back to 1966. 56 years later, in 2012, the cantilevered front of the building (as well as the inside) had to be supported by those yellow struts you see in the shots, due to the detrimental effects of concrete rot. While nothing short of a sacrilege when you first lay eyes on them, from a photographic point of view, they can be integrated like any other element, I suppose. 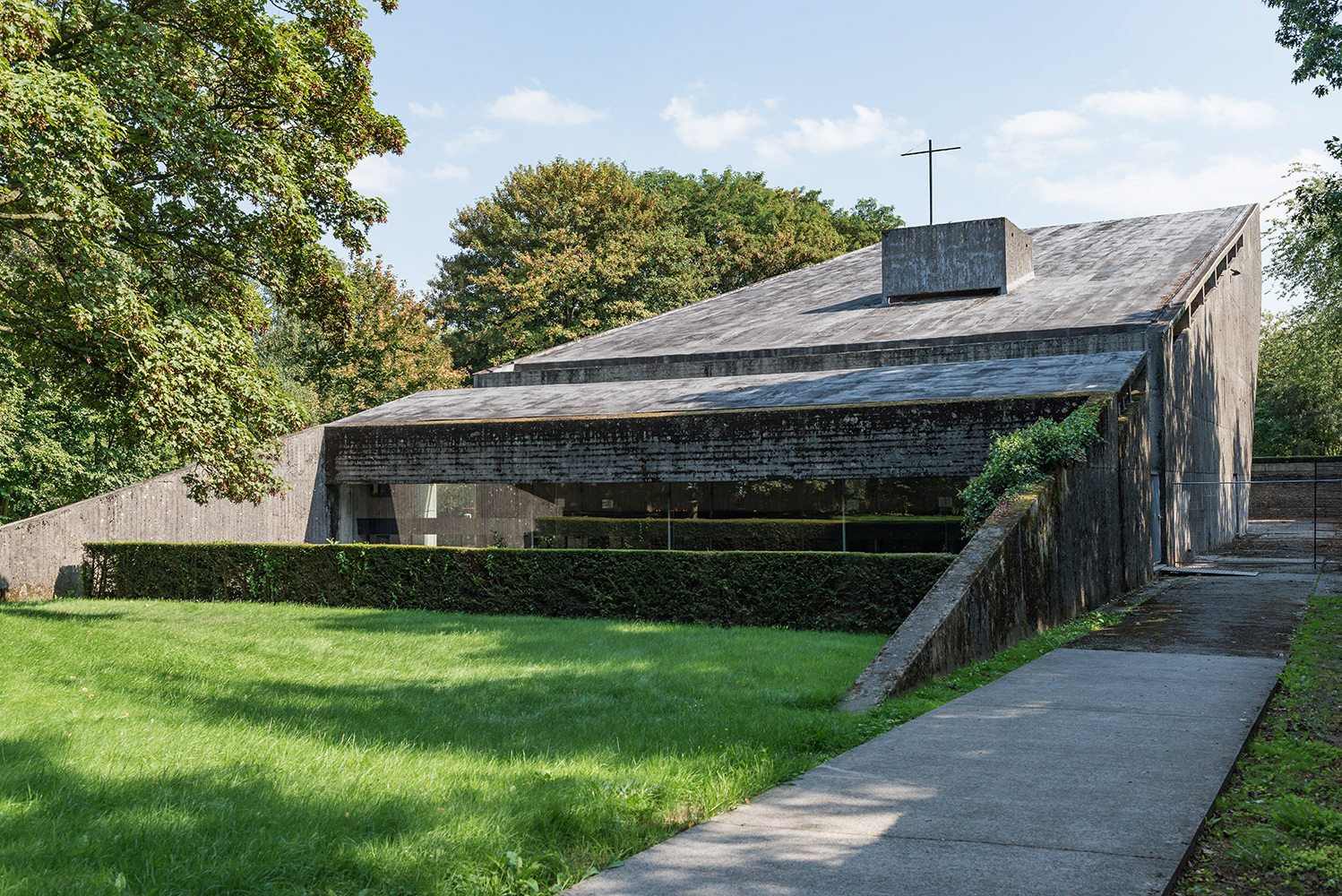 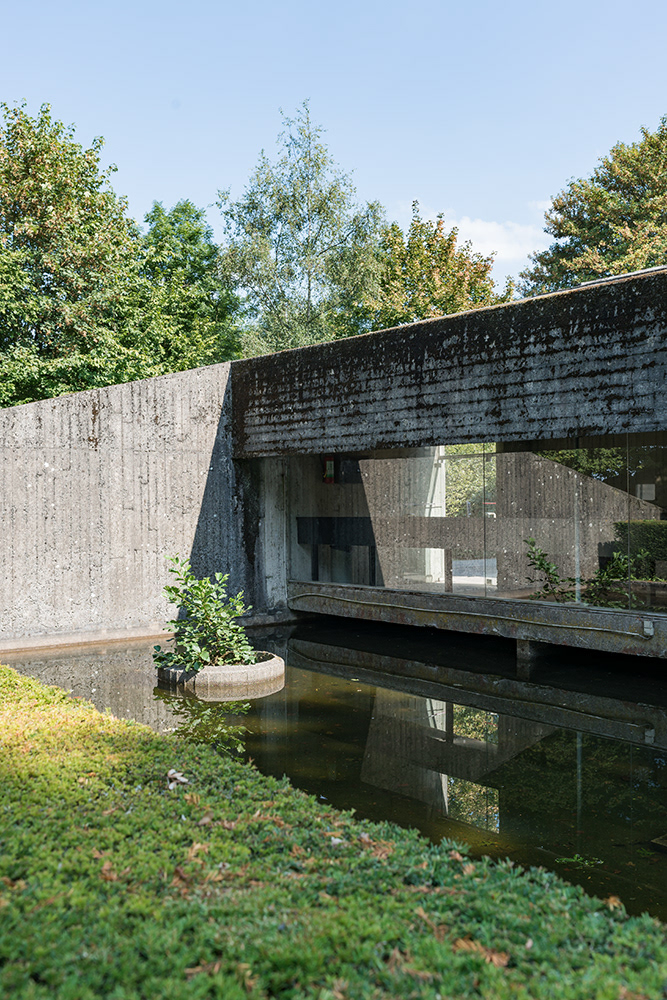 There's a rather funny anecdote to be told about our shooting session. There almost always seem to be one, doesn't it ? The place was not particularly funny of and by itself (at least not more so than any other place of worship), so I guess it must be me. Anyway, the chapel actually consists of two parts (i.e. the main chapel and a room to light candles and enjoy a view of the garden) which are connected by an artificial pond that catches the rain coming from the roof of the main chapel. 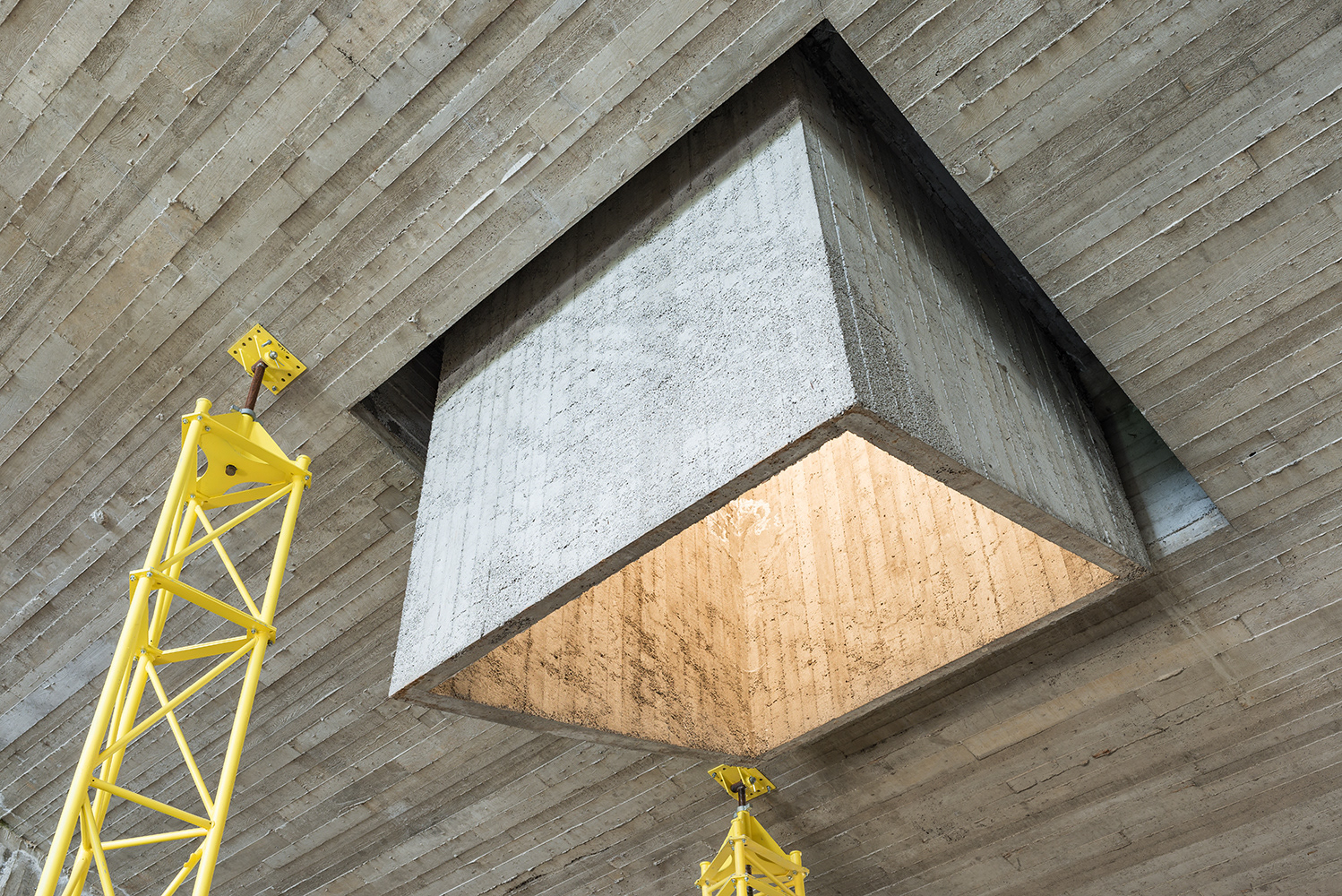 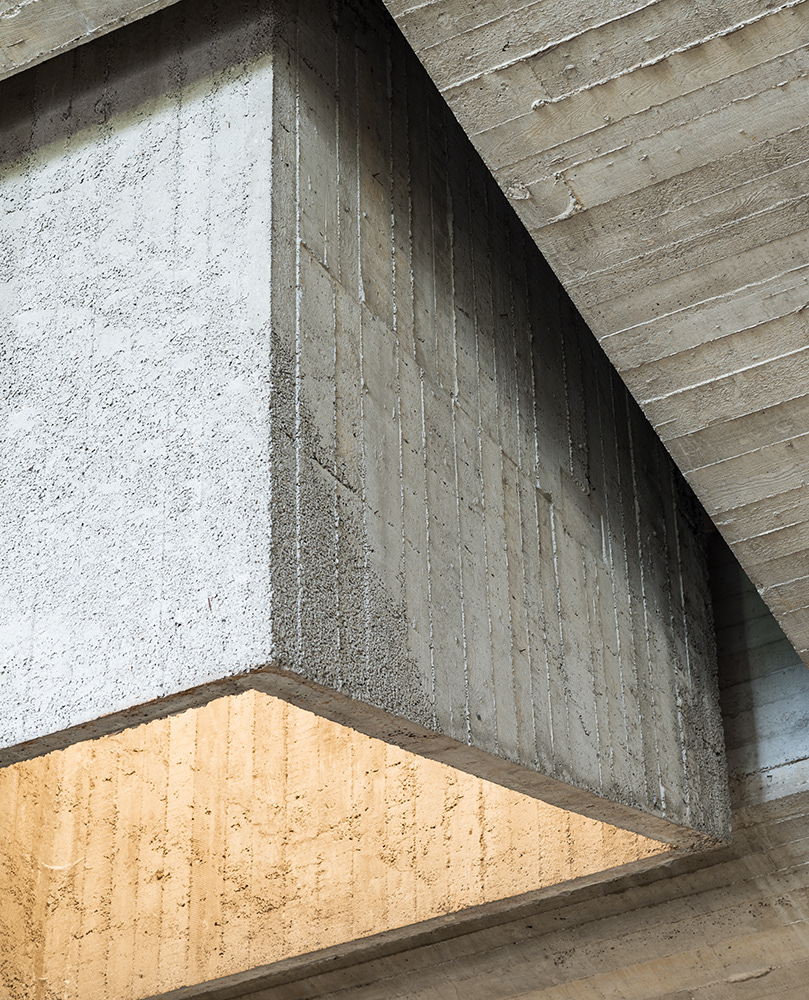 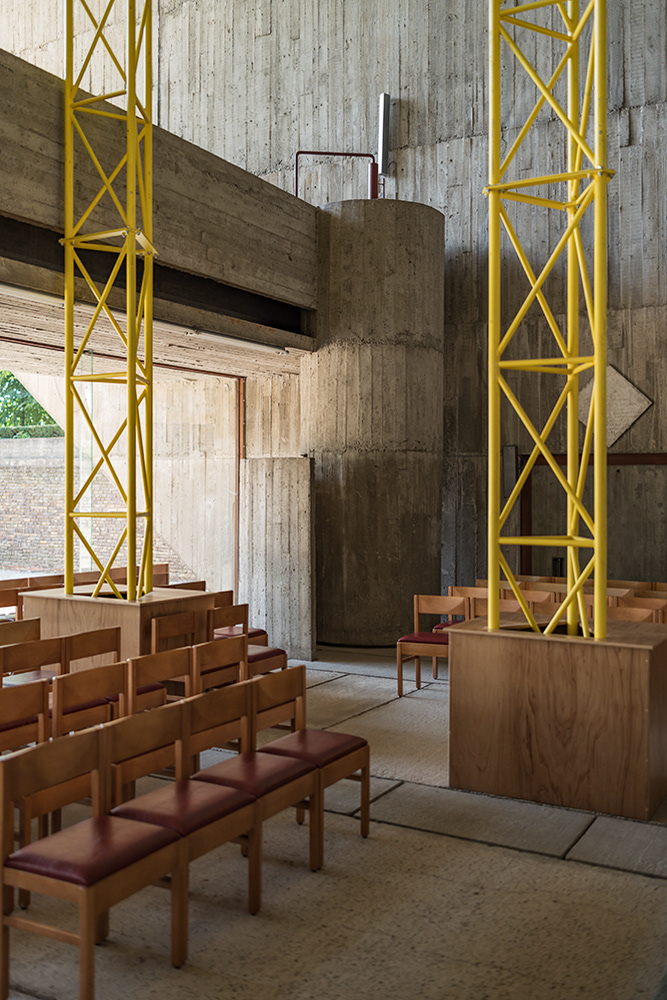 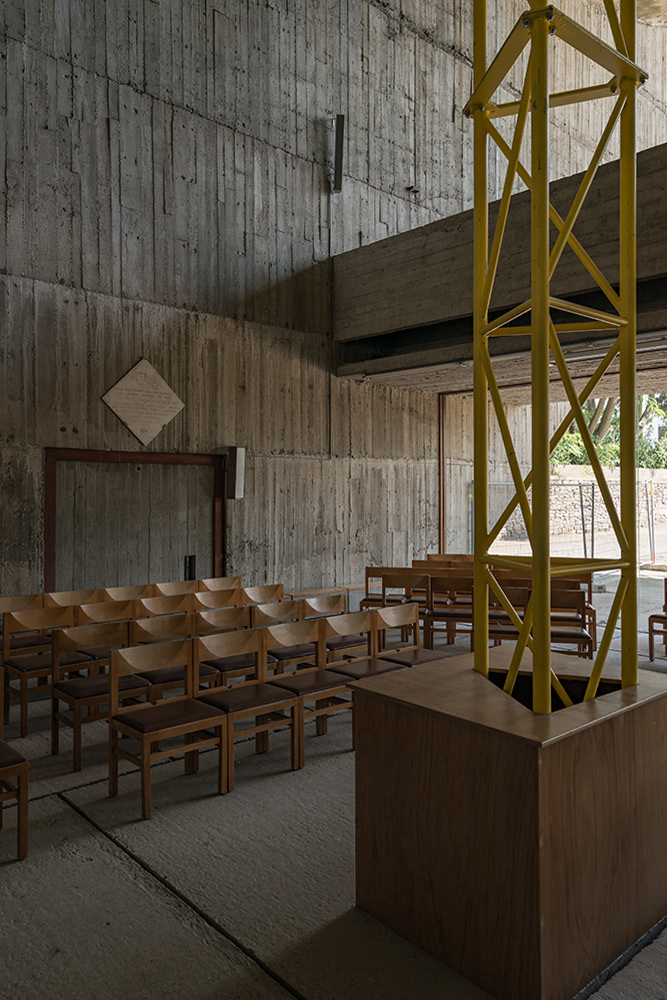 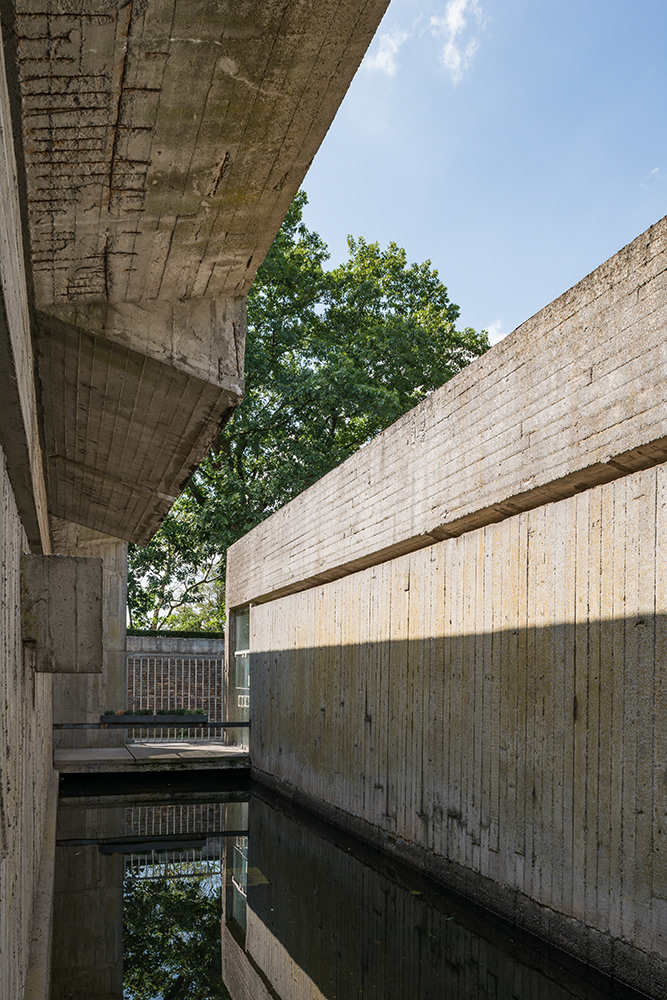 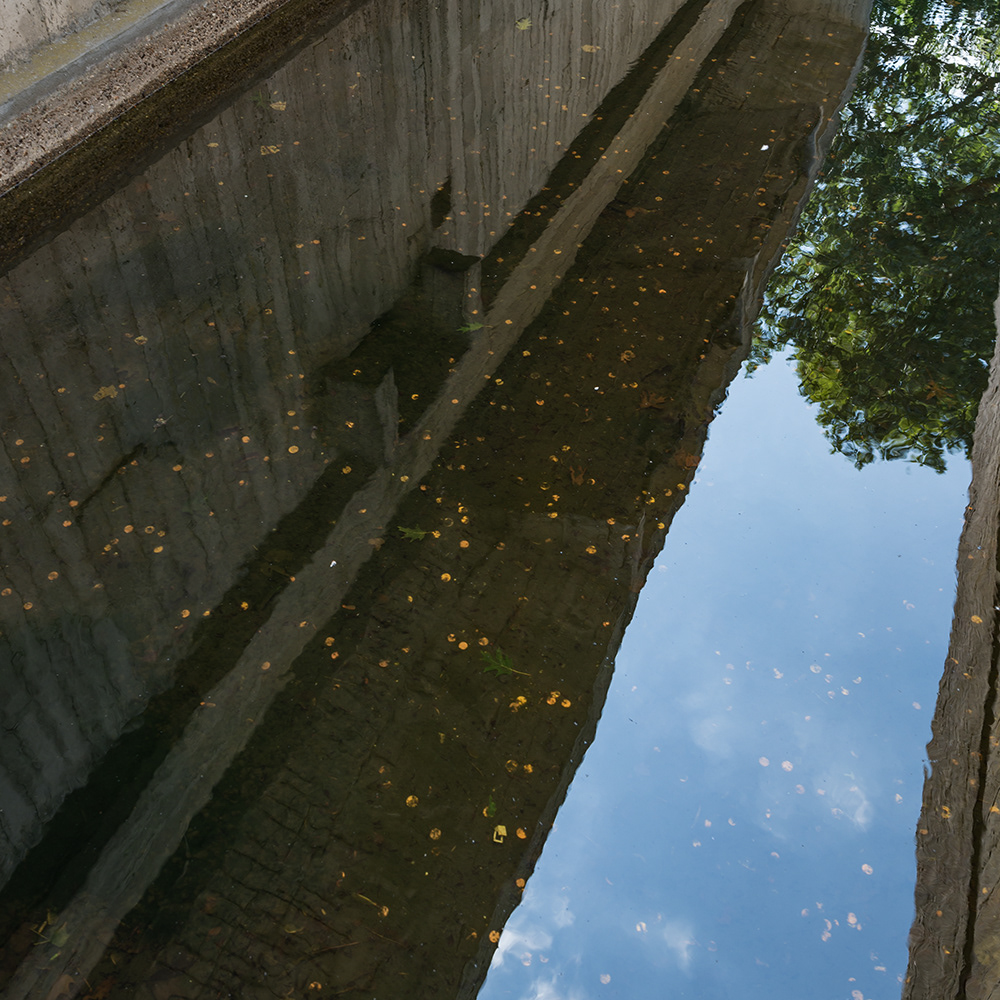 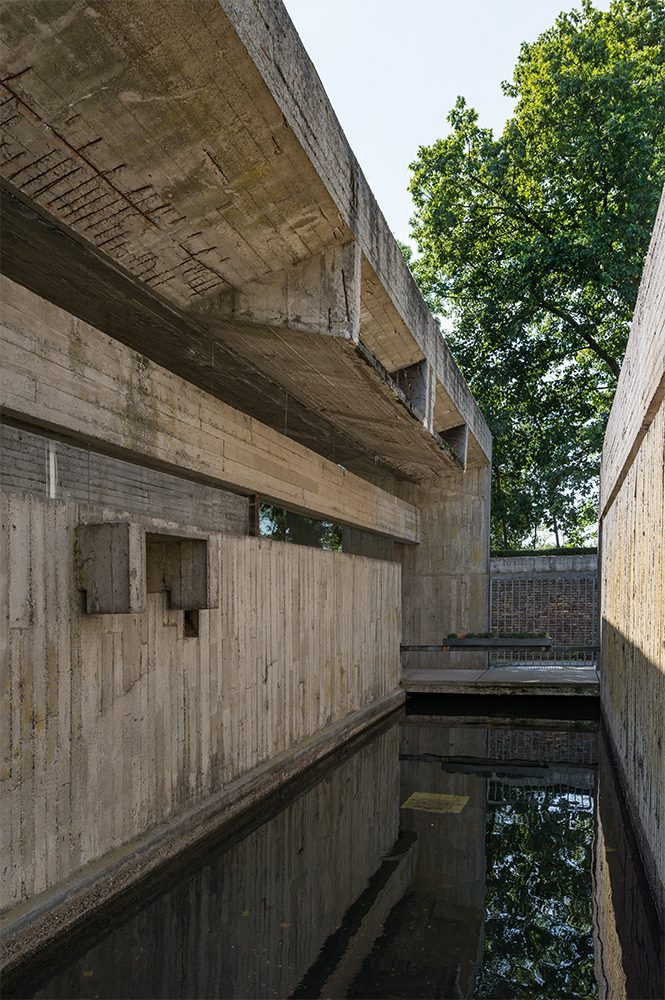 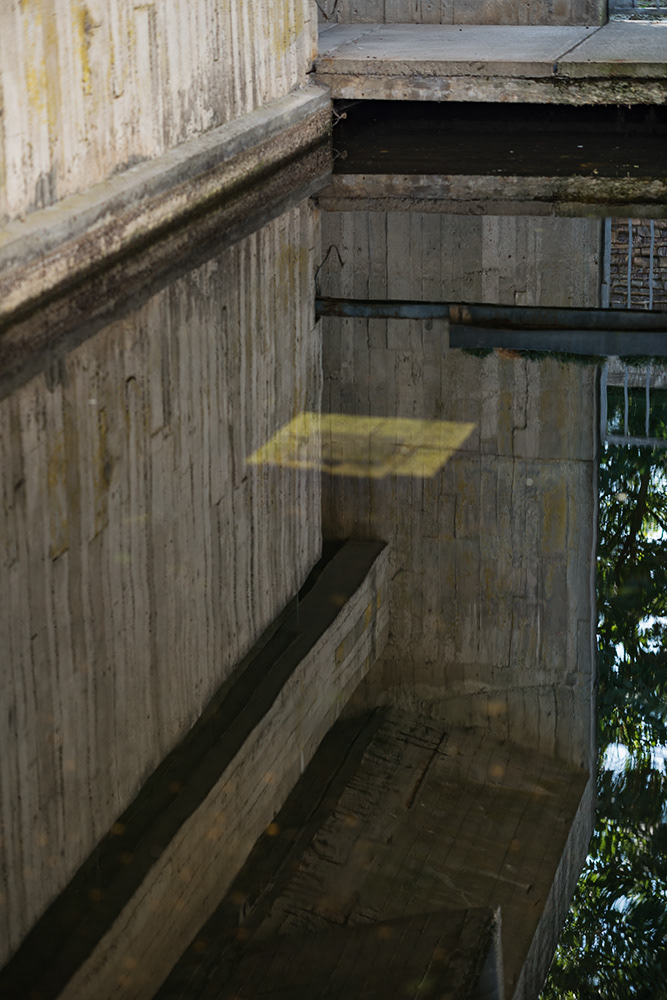 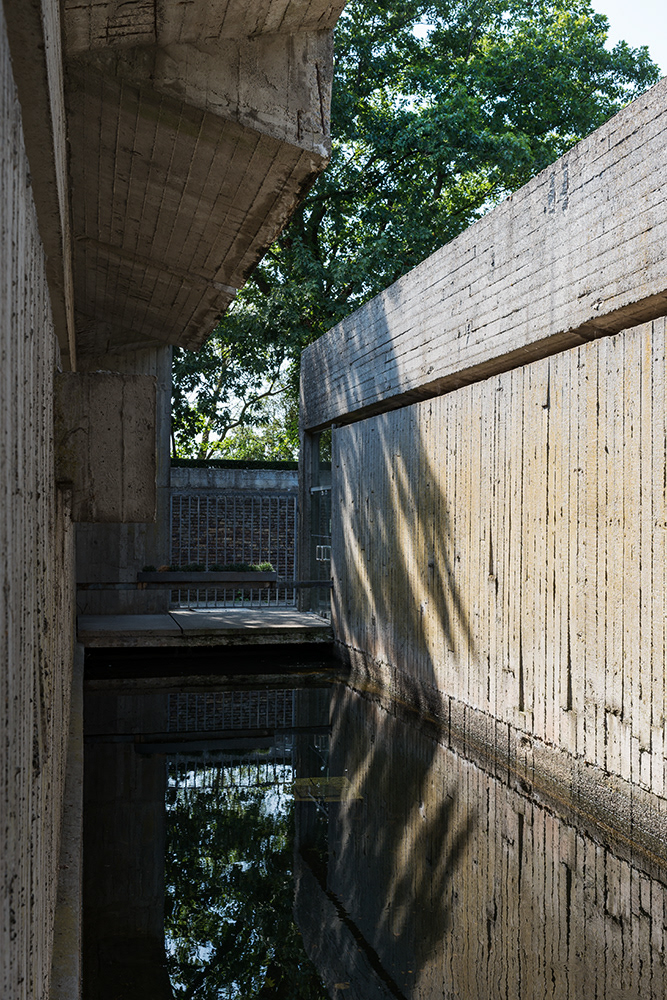 Suddenly, I noticed an adult salamander leisurely cruising through the water, only the top of its head above the water - and after you've seen one, you see a bunch more. No idea how they get out of the pond, if they can at all. There were also a significant number of coins in the water, most of relatively high value (1 euro, 2 euros). Add to this the penetrating scent of fresh waffles being baked in the pub in front of the chapel (merchants in front of the temple entrance, and all that), and nearly all elements of the story are in place. Noticed the "nearly" in there ? 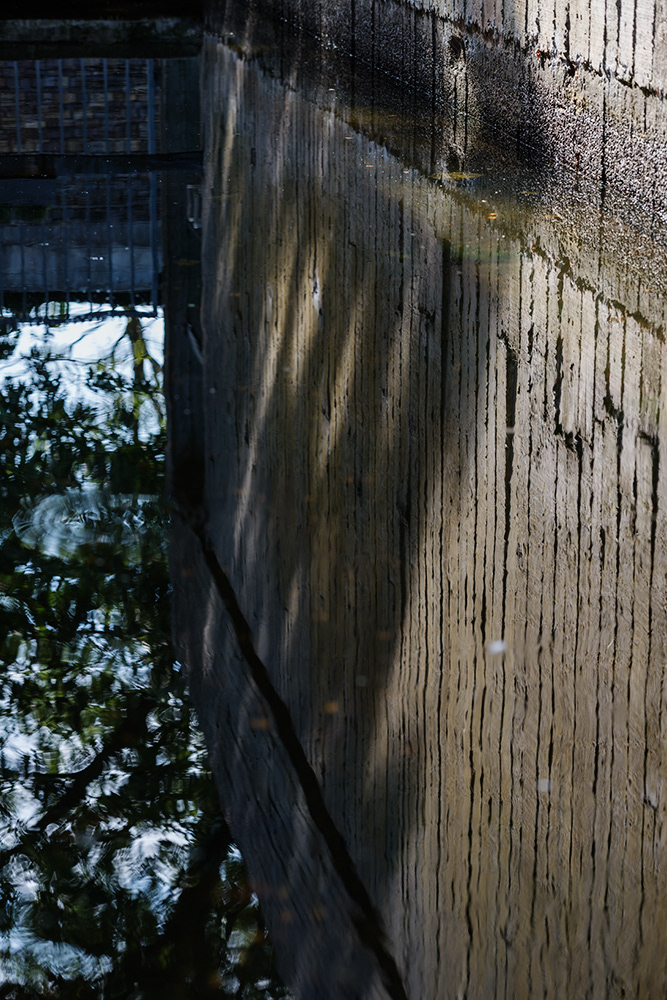 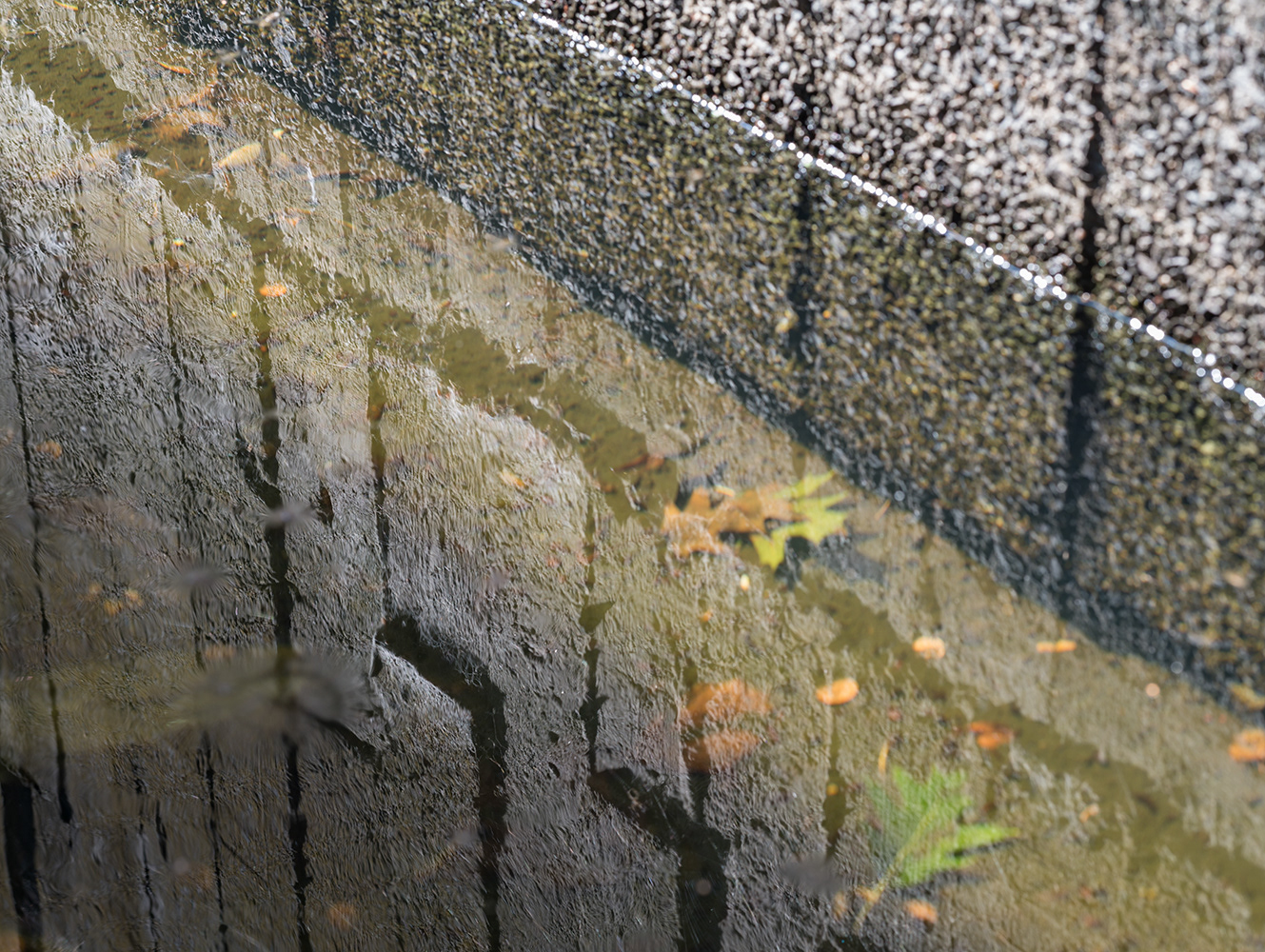 Any rational mind would have been seduced into considering how these different threads could be woven together. My own attempt was this: as the metal in the coins poisons the animals living in the pond (it does, look it up), one has at the very least a moral obligation to remove them from the water. Maybe even a legal obligation (animals in need). Ambiguity comes in, however, when considering what to do with the money, the residual product of the good deed. The two extreme possibilities, i.e. donating it to the chapel (also in need), and risking an indigestion by gulping down waffles and cream on a hungry and sugar-craving stomach, were fairly evenly matched at this point. The choice, or even the possibility of some sort of compromise, would depend largely on who legally owned the money. Almost as inescapable as the poison premise (there were even little ones in there, for god's sake !), was the fact (well, let's call it a hypothesis for now) that people must, unknowingly, have lost the money during their visit to the chapel. I can think of no logical reason why people would purposefully drop their well-earned money into the water. It did struck me as odd though, that, while clearly concentrated around the eastern walkway, the coins were actually spread out through the entire, multiple meters long (and fenced) pond, almost as if they had been thrown, which does not seem to support my hypothesis. 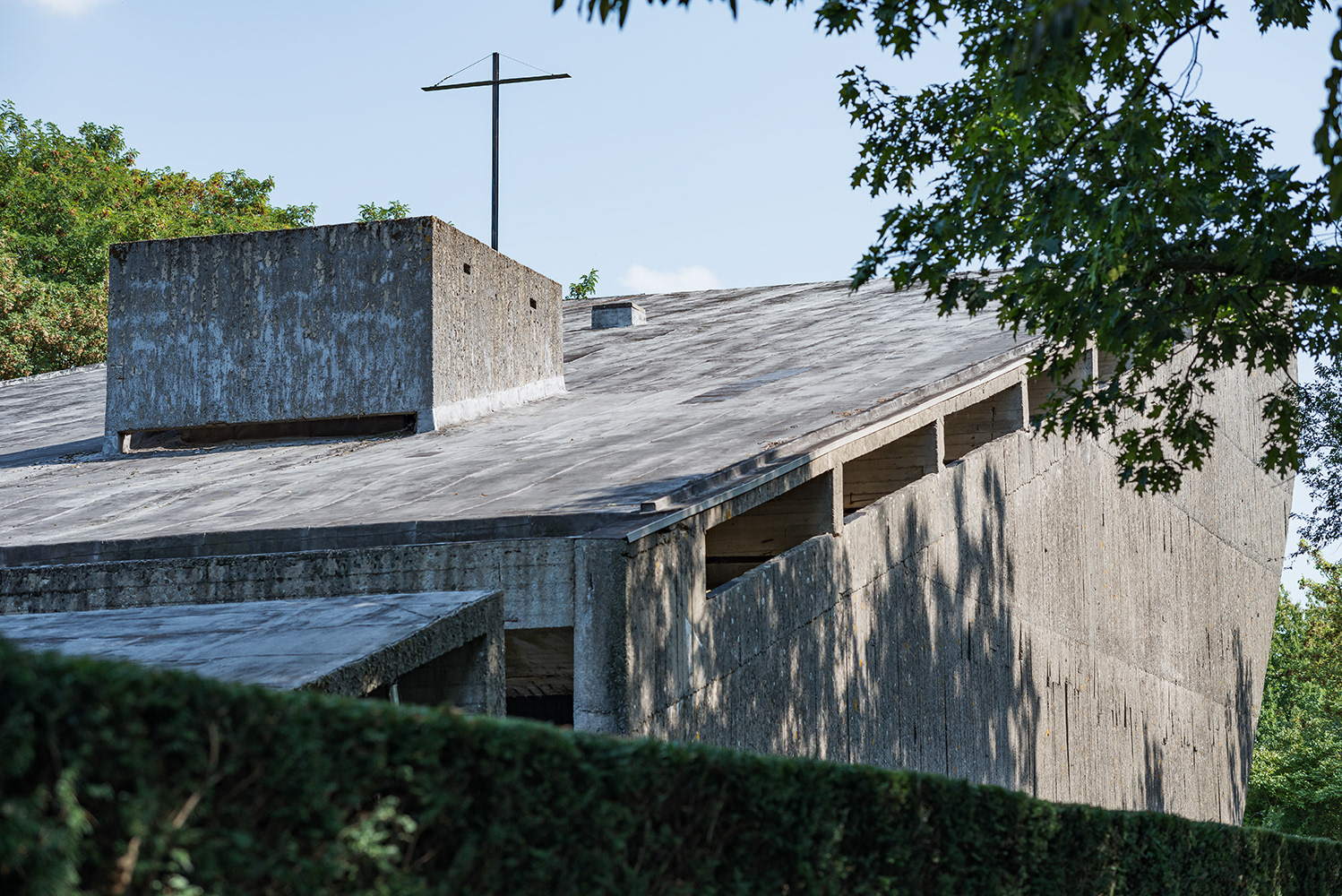 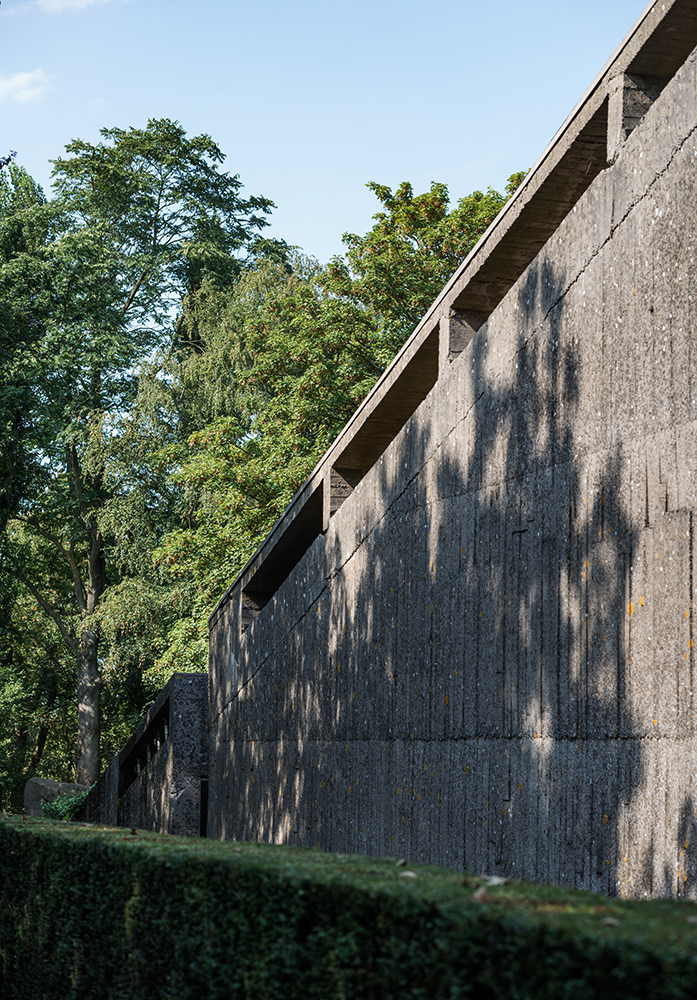 Nevertheless, and despite the sugary air acting like steroids on my brain, I was unable to disentangle the matter of legal ownership: finding money at least entitles one to a finder's fee (i.e. a compromise), but I remembered that this would depend on where it is found, i.e. on private vs. public property. While I gathered that the chapel may not necessarily have been municipally owned, that still didn't decide the question of its public nature. Either way, there were no quick means to get answers. But at the very least, making an effort to collect all that money by wading knee-deep through a body of cold (laying in shadow most of the day) water must be worth something, right ? 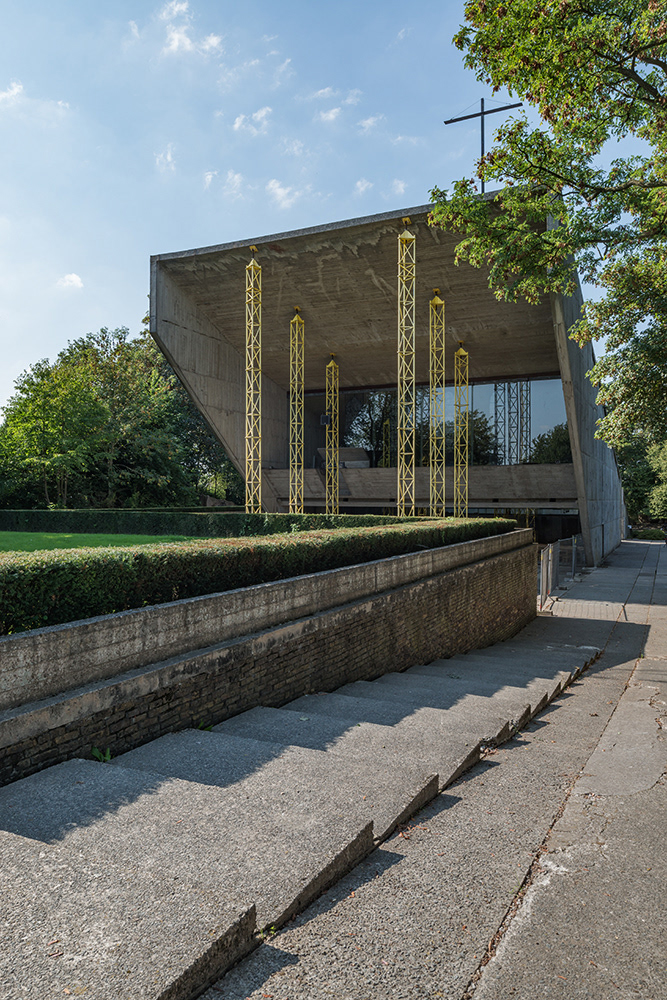 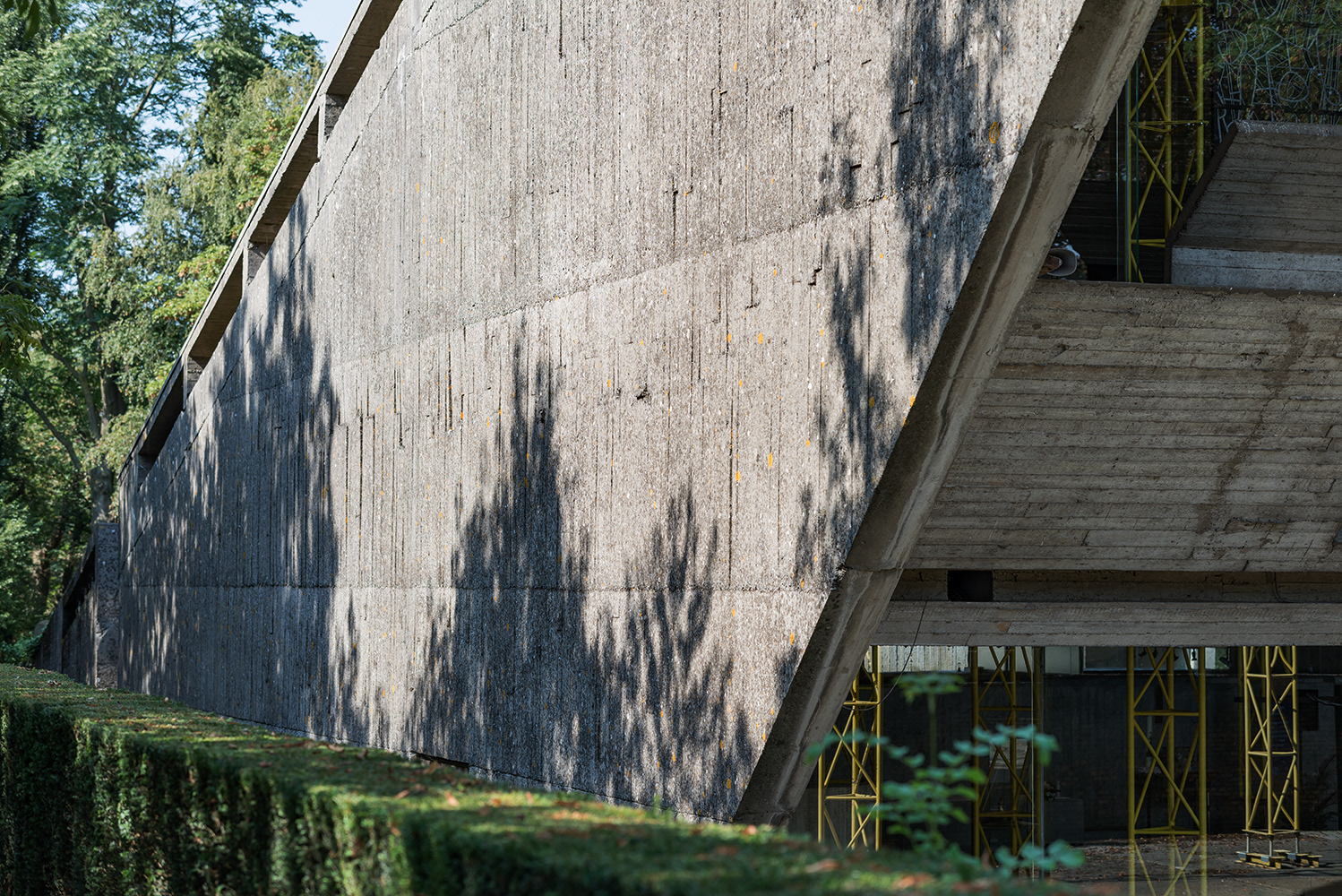 Out of the blue, and while I was still standing on the pathway overlooking the pond, completely turned inwards and disentangling that nasty little brain parasite, in comes the final element of the story, in the form of two policemen. Apparently, they were looking for a lost person, and wanted to know whether we'd seen a man answering their description. We'd only seen couples during our visite, so that was a clear negative. Although their sudden appearance had brought me back to the real world in the most abrupt kind of way, I did have the presence of mind to consider that surely, they must know the legal ramifications of finding a sum of money in a pond, public or otherwise. 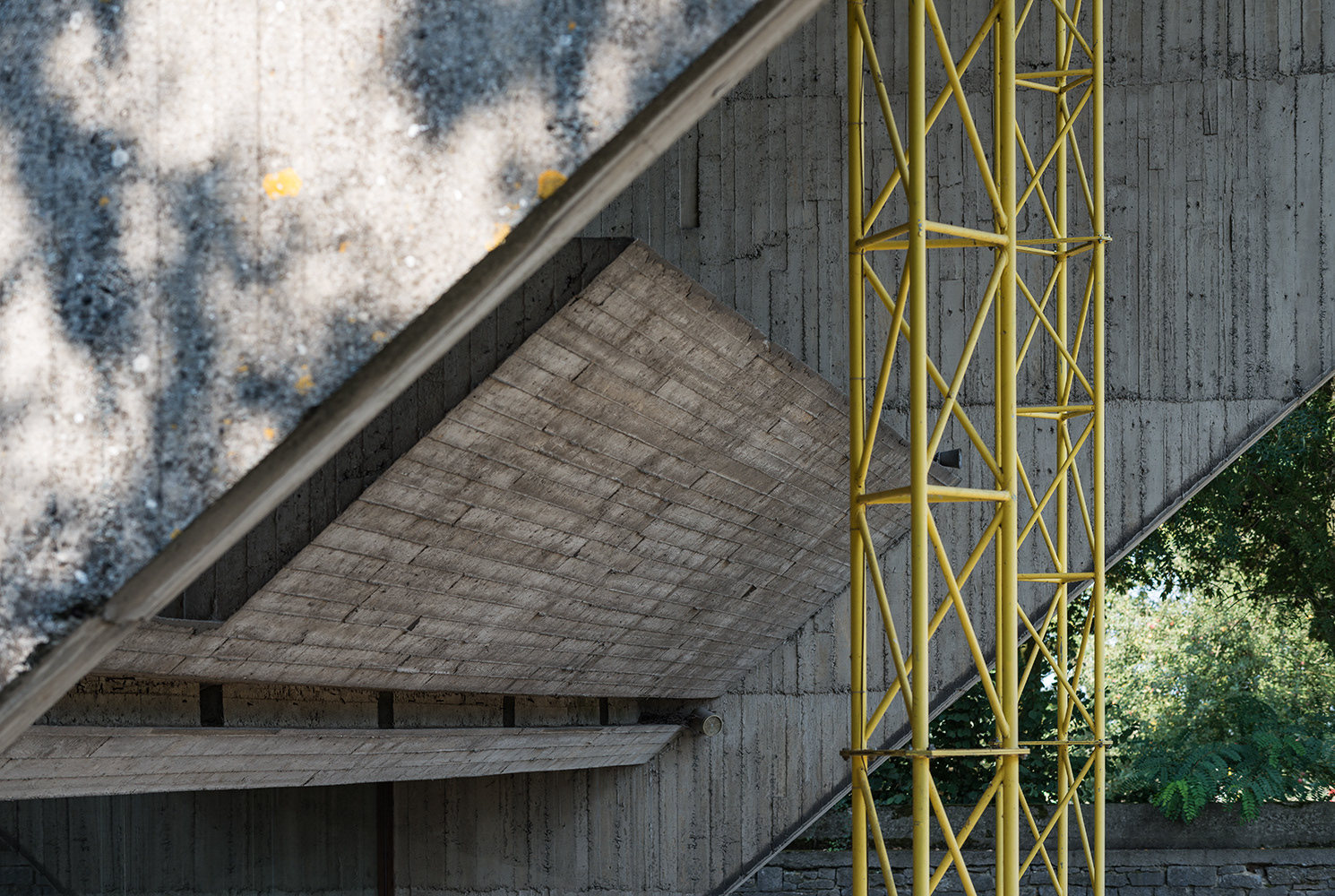 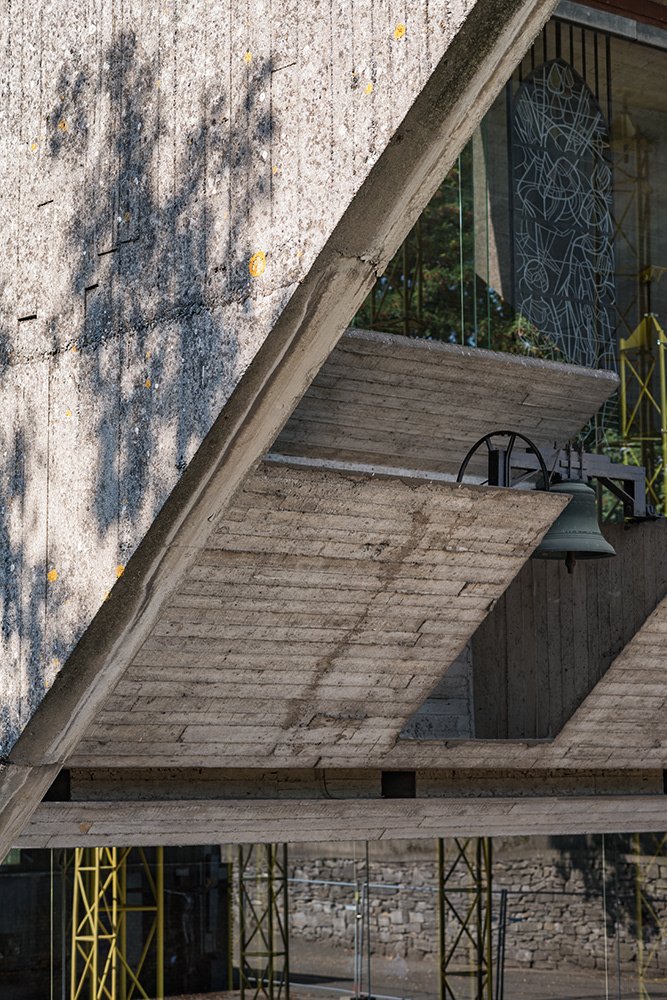 However, before I had the chance to address the matter, one of them enquired whether we were professional photographers. He followed lessons himself, and had the evidence to back up that claim by showing us several galleries worth of pictures he kept on his cell phone. There was some real eye candy in there, and having shot on a number of the same locations myself, we got into one of those conversations that people have only when they're passionate (some would even say "possessed") about something. By the time the bilateral information flow had dropped to almost socially accepted levels of intensity, the smell of the waffles had faded (out of the air, as well as memory), and fully hyped-up on photography again, we enthusiastically resumed our shooting session. 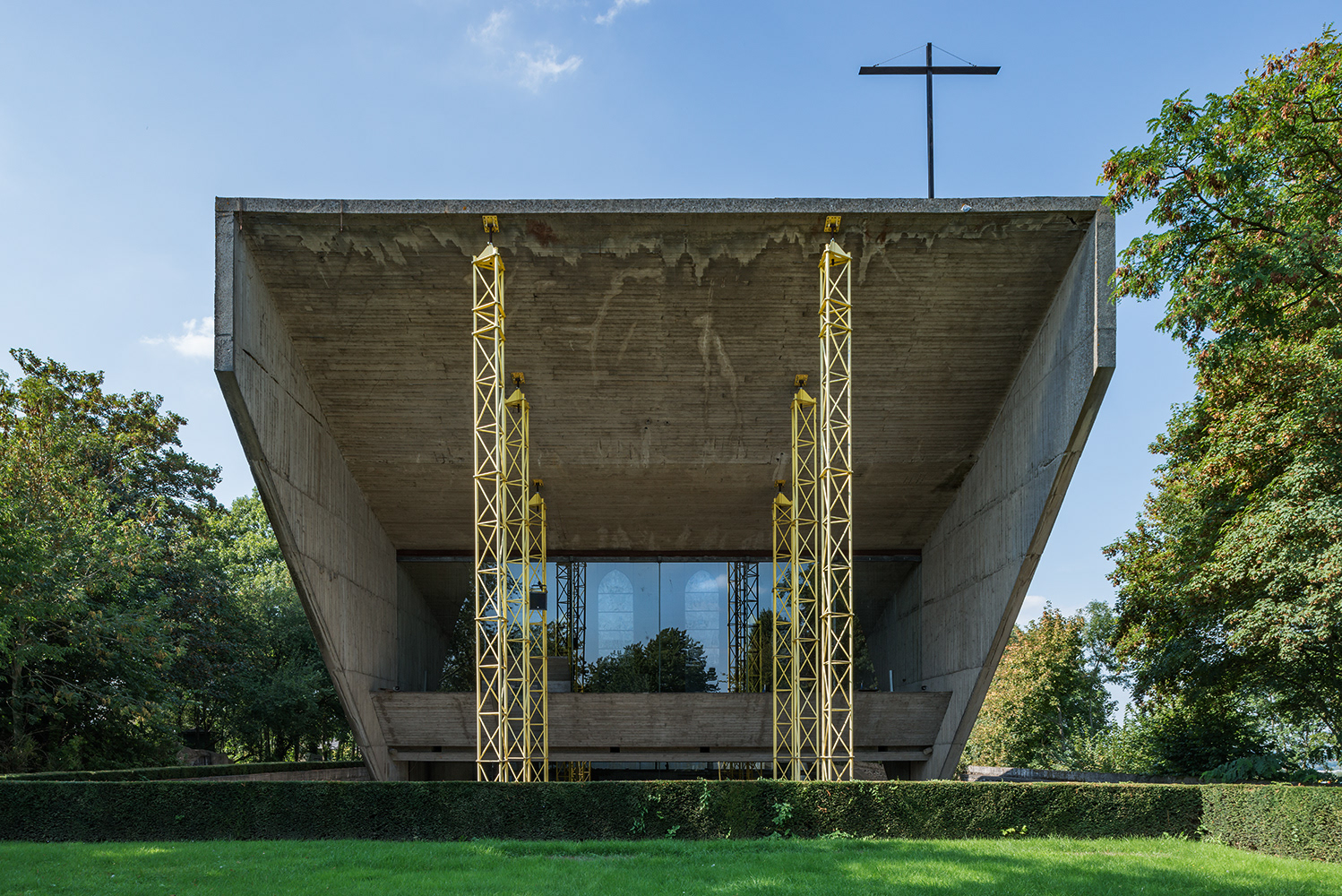 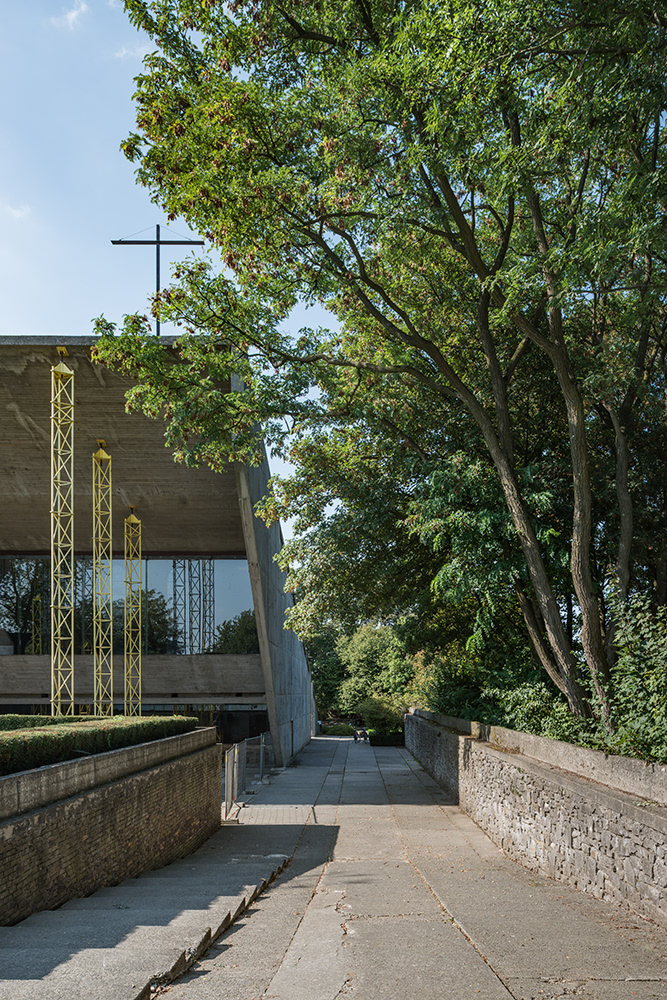 There's probably a life lesson in there somewhere.

Landscape: Autumn from the window

Architecture: Juliaan Claerhout
↑Back to Top