I have to admit, I was a bit puzzled when the editor of Ex Situ asked me whether I was interested in shooting pictures for an article on Juliaan Claerhout. From what I knew of him, he seemed to be something of a Lemaître figure, i.e. a scientist-priest, but, and here's the difference with George Lemaître (who was only recently officially reinstated as one of the founding fathers of the Big Bang theory - the actual theory, not the show), Claerhout was familiar to me only as the author of a contested interpretation of the occupation traces he found in the vicinity of the Peperlaar creek in the village of Dentergem. Still, I was intrigued because obviously, I clearly must have been wrong about Claerhout for Ex Situ to devote a whole article on the man, so I accepted. That, and because almost any excuse is good enough to go out and shoot.

As usual with the magazine, the brief essentially consisted of a shot list. This time the pictures (and their text) had to allow the reader to tread into the footsteps of Claerhout. That meant:
* landscape shots of the valley of the Peperlaar creek (now called Krommendijk creek), preferably as it would have revealed itself to Claerhout more than a 100 years ago;
* pictures of the street (and one house in particular) which was built on top of a Roman burial field excavated by Claerhout, the name of which still referring to its rather morbid past ("Heidens Kerkhof", or "Heathen Cemetary");
* images of a statue of Claerhout in Wielsbeke, where he was born;
* photos of the church of Kaster and its immediate surroundings, where Claerhout spent the remainder of his days and was eventually buried in 1929. 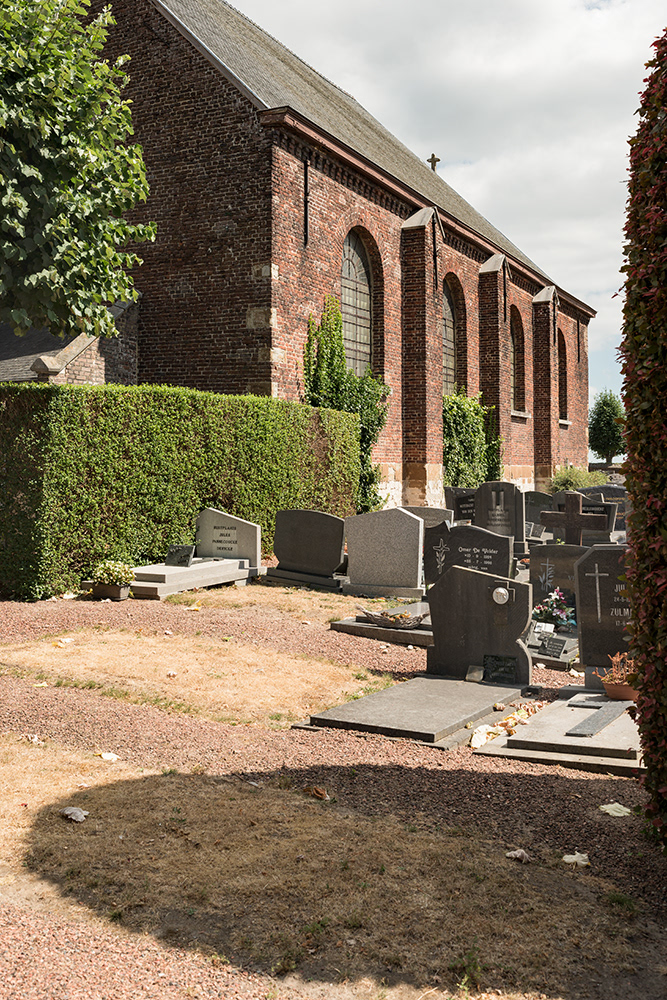 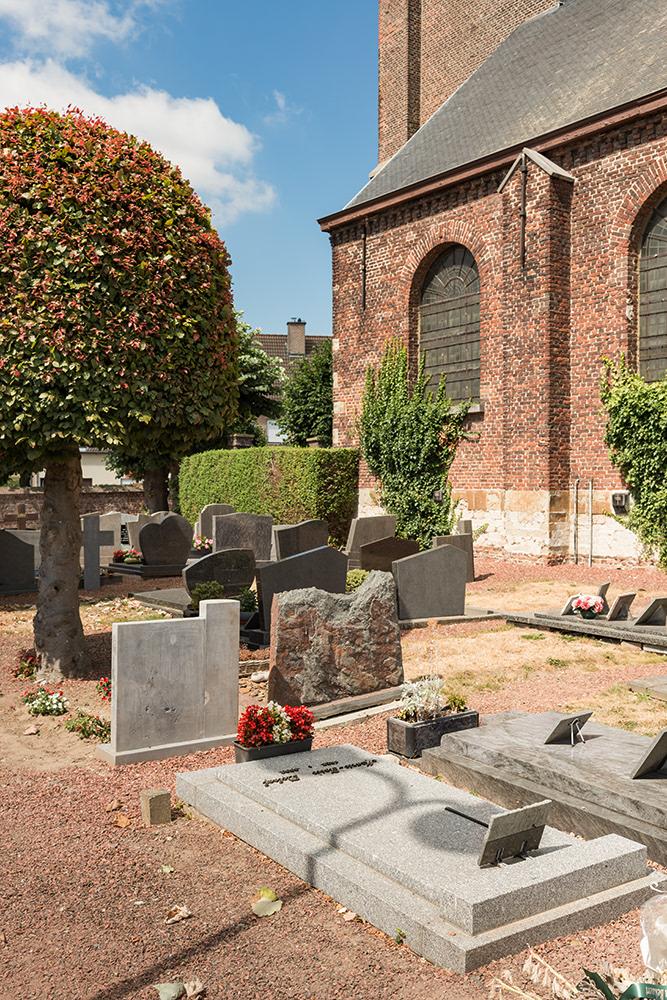 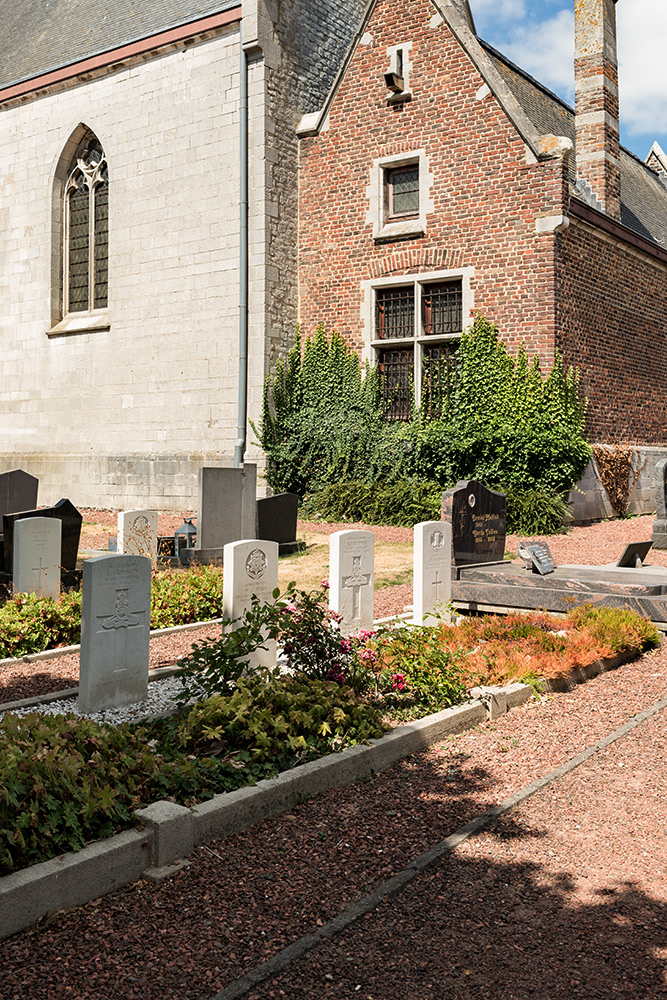 The last item on the list was the most ... fulfilling, I guess, so we'll start there. Before preparing my visit, I was kind of expecting a run-of-the-mill church, of which there are hundreds in Flanders. In part I was right, because the church, apart from obvious signs pointing to a rather odd construction history (different styles, different materials, and no apparent intention to mix them in an esthetically pleasing way), was not special in and of itself. However, the surrounding cemetary, its position at the edge of the concentration of (primarily) houses making up the hamlet, and the weather, did give it that special twist. 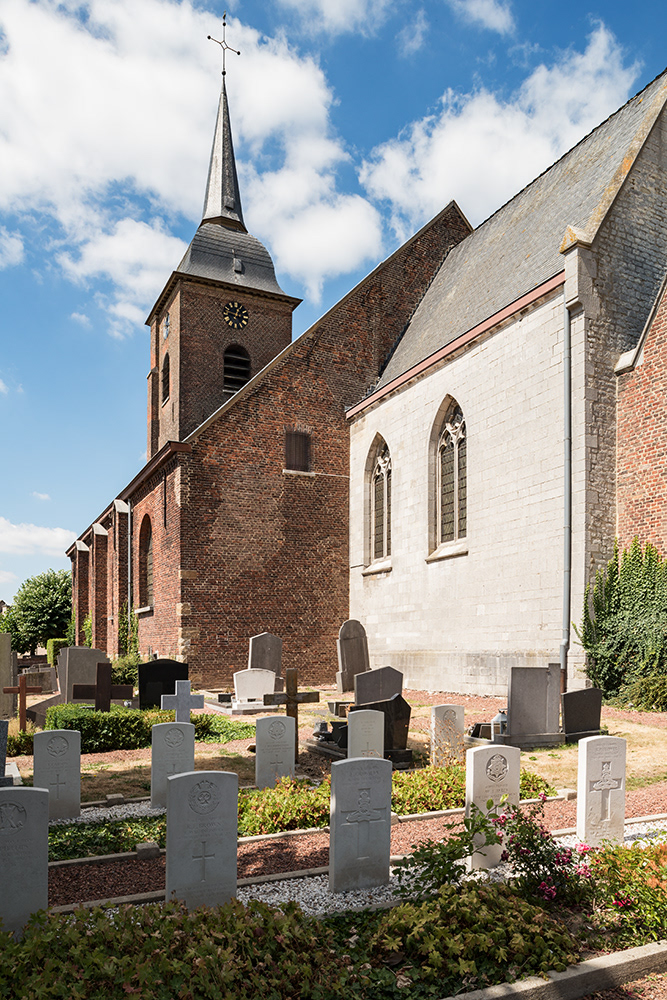 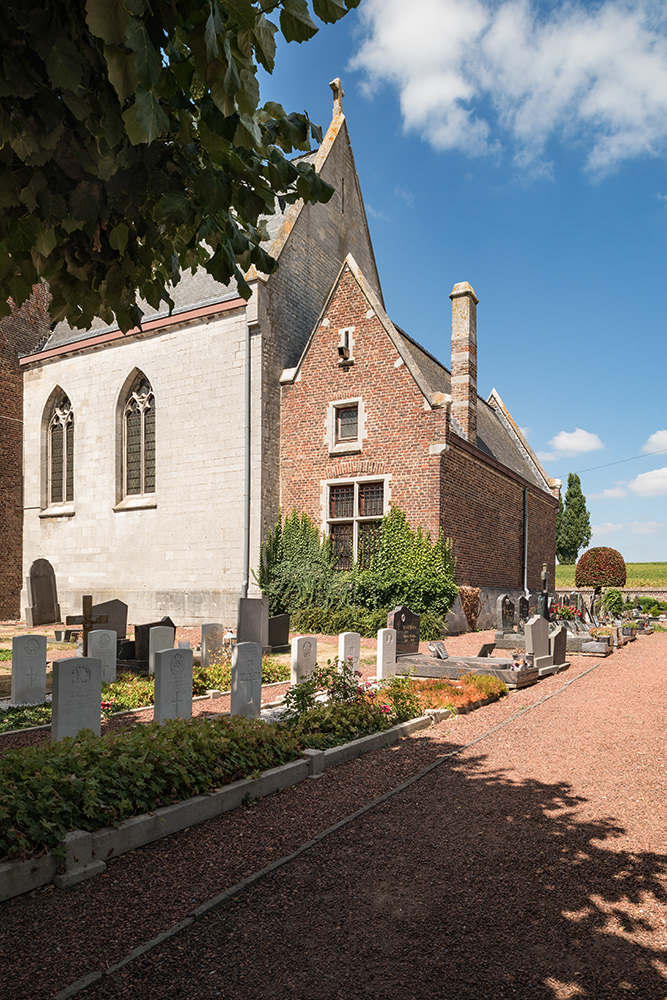 We'd been caught in a heat wave for several weeks, and at the day of my visit too, from about noon, the sun started to burn really hard (and so did the top of my head), casting hard shadows while at the same time, bleaching rather than saturating the colours of the surrounding agricultural landscape (the heat and drought of the previous weeks had a lot to do with that too, of course). Because light seemed to reflect brightly off of each and every surface, shadows were never really that dark; still, I probably lifted them a little further in post than they were in reality, if only to match my feelings about the place. 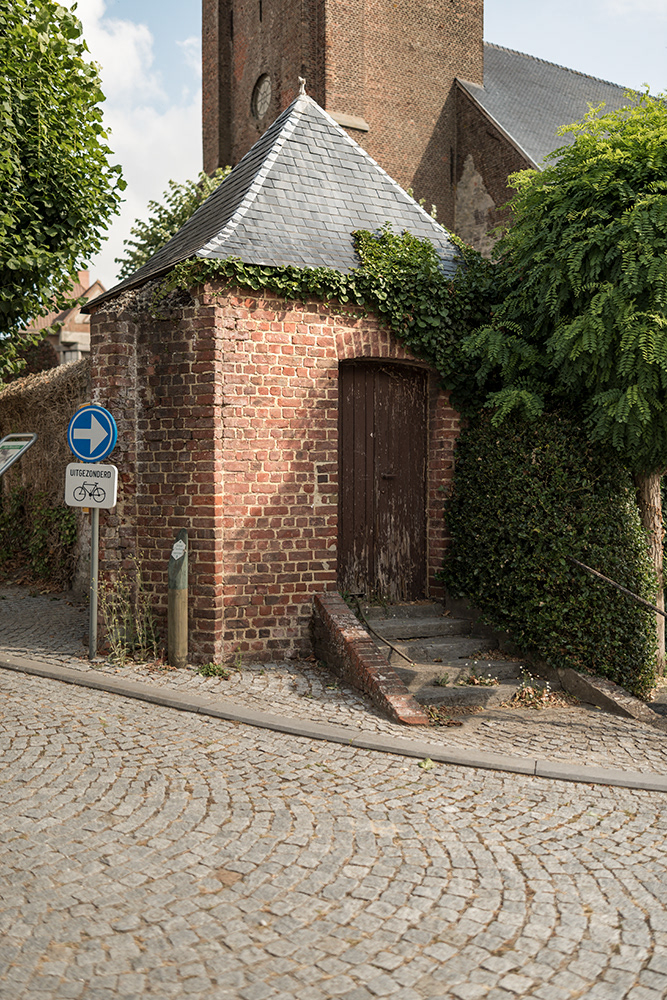 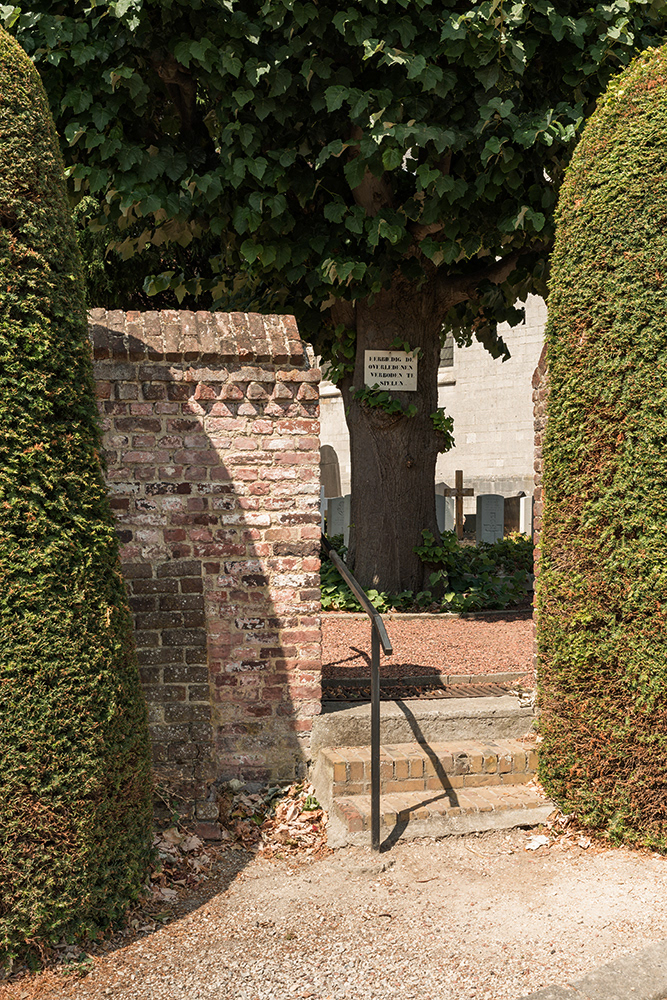 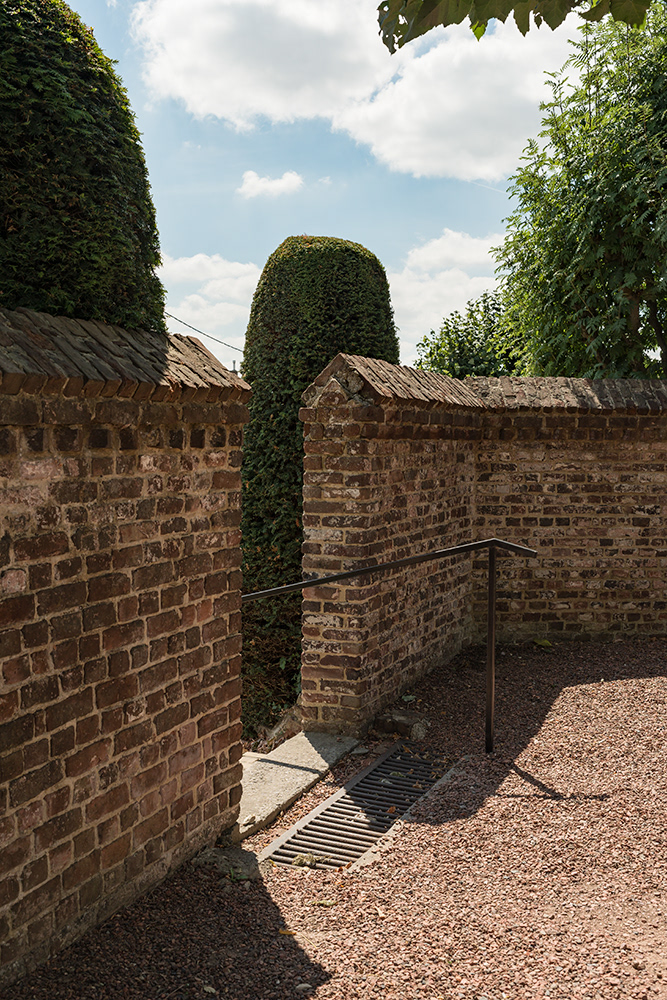 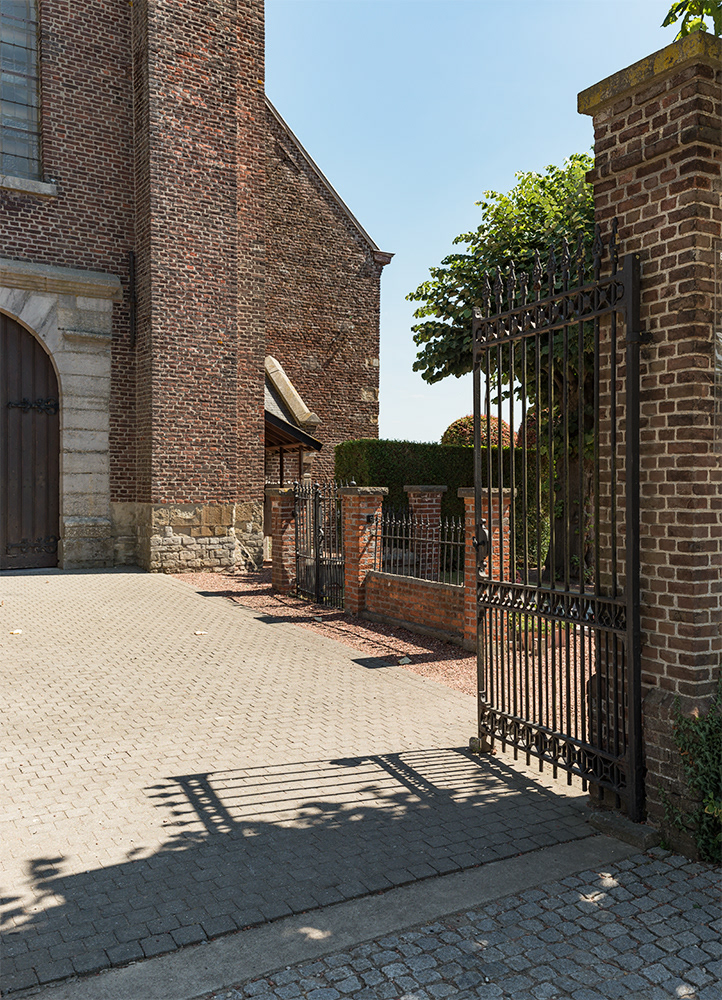 As I entered the walled cemetary from the southeast entrance, there was not a soul around. No strollers, no bicyles, no cars. No one, not even a bird or an insect. What first presented itself to me as a picturesque scene, igniting that familiar prickling hairs-on-the-back-of-your-neck-raising eagerness to shoot before a stray cloud passes in front of the sun, suddenly snapped into bullet time serenity: a church, proudly displaying its apparently convoluted history - as well as what can only be described as a clear disdain for perfection, an actual church "yard", encircled by an old red brick wall and filled with trees, the open fields surrounding the church yard, lonely trees in the distance, and an absolute silence that's become so rare in these parts ... 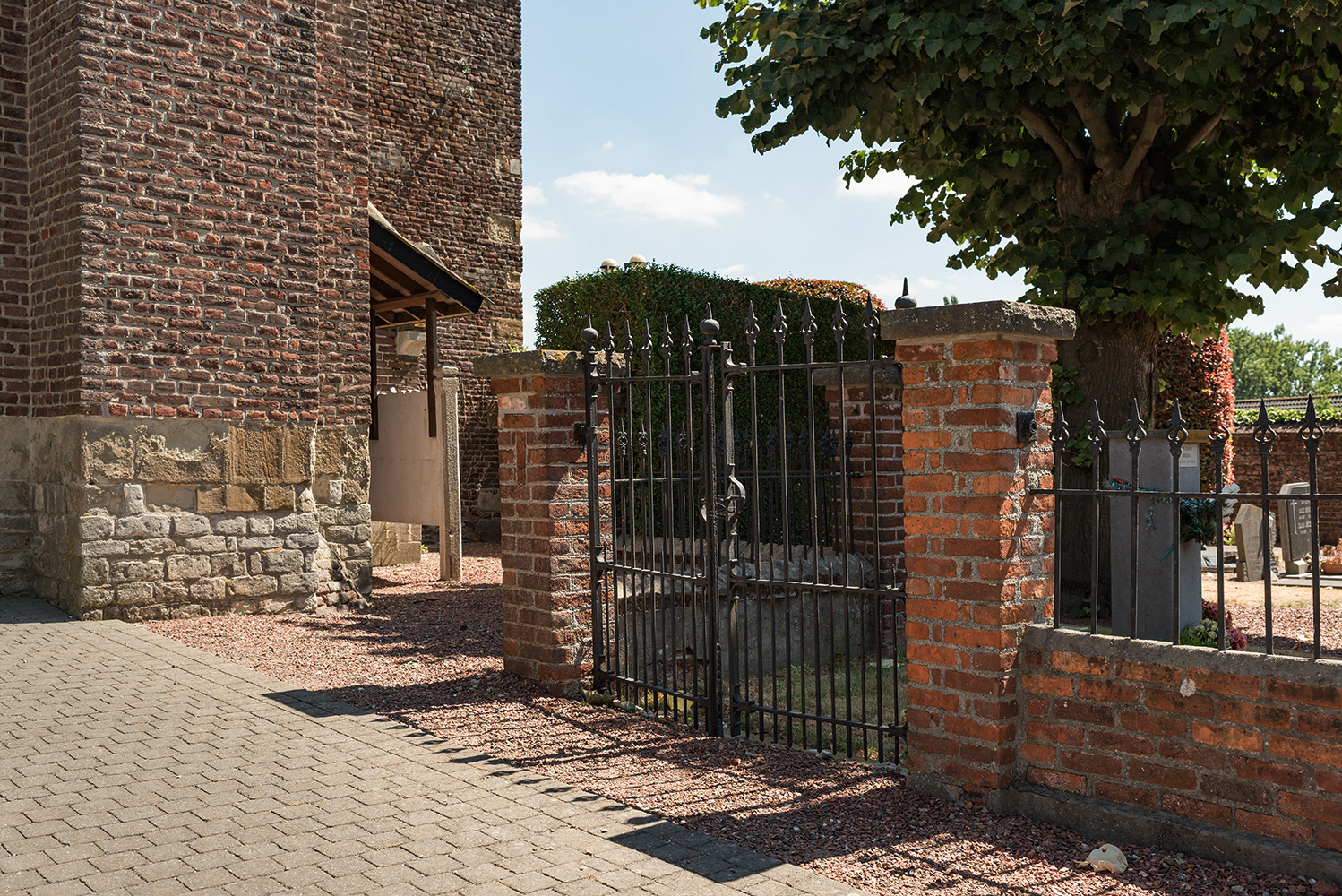 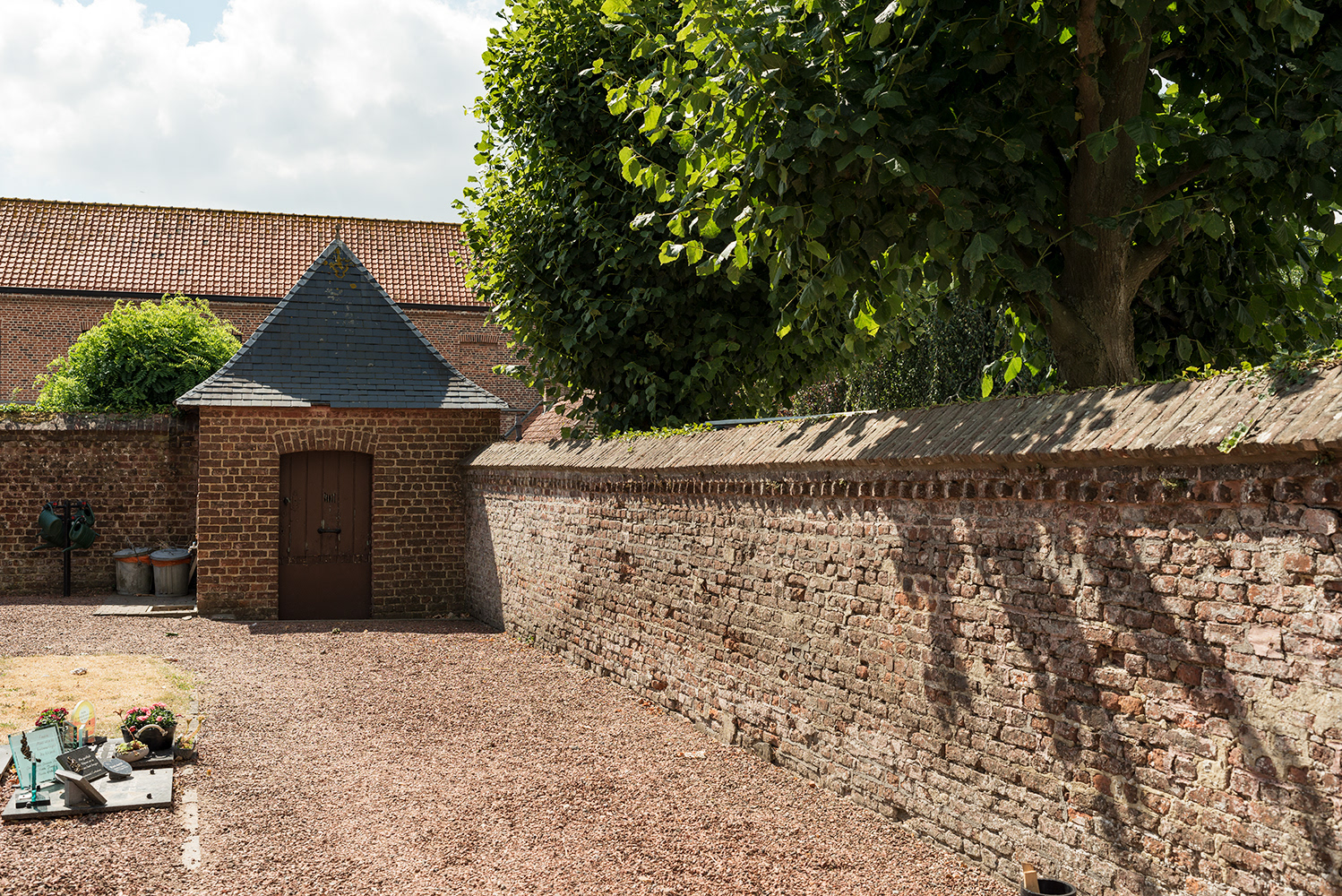 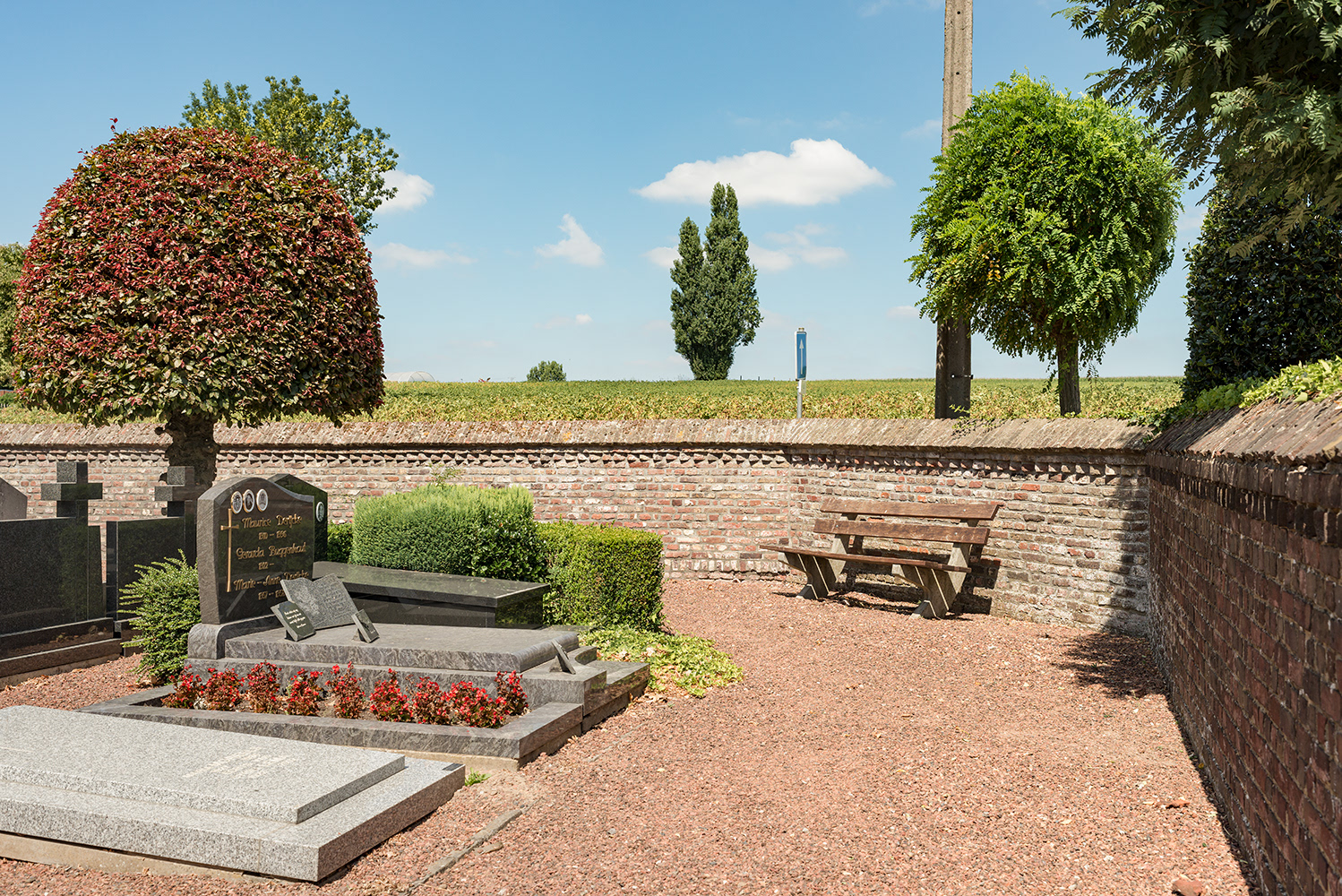 It must have been the combination of the heat, the quality of light, the golden colour of the corn field east of the church (despite already having been harvested) offset against the blue sky, that brought my mind back to Italy, which I haven't visited for 23 years. 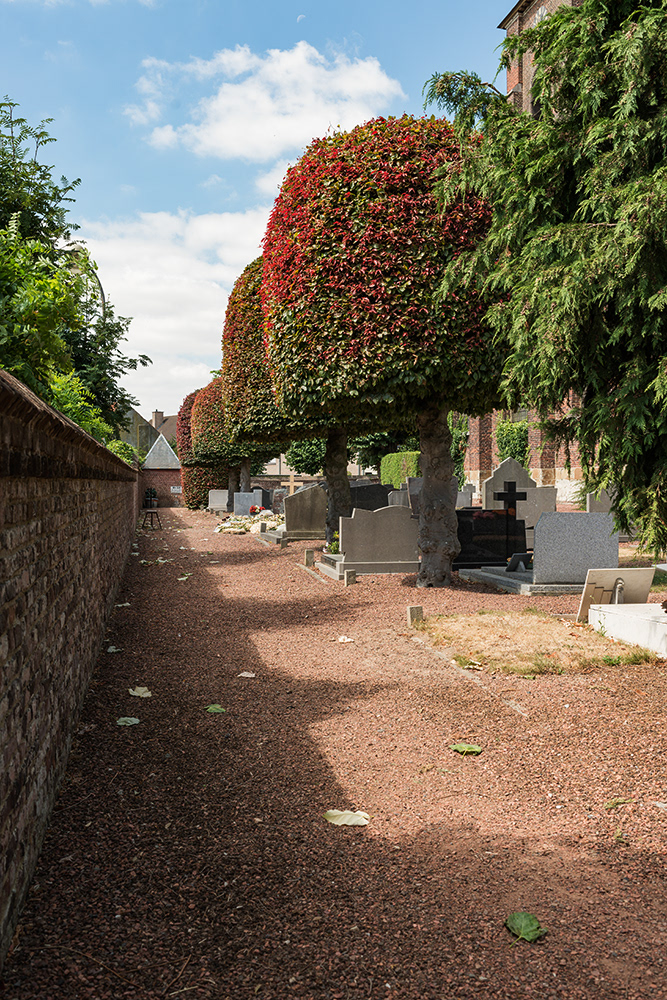 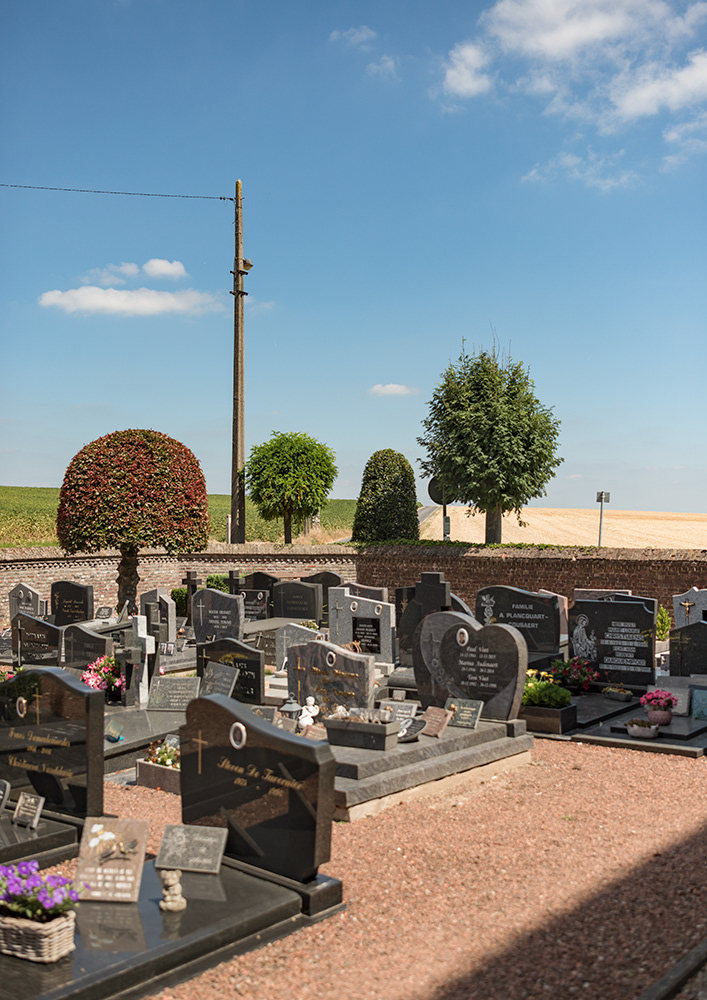 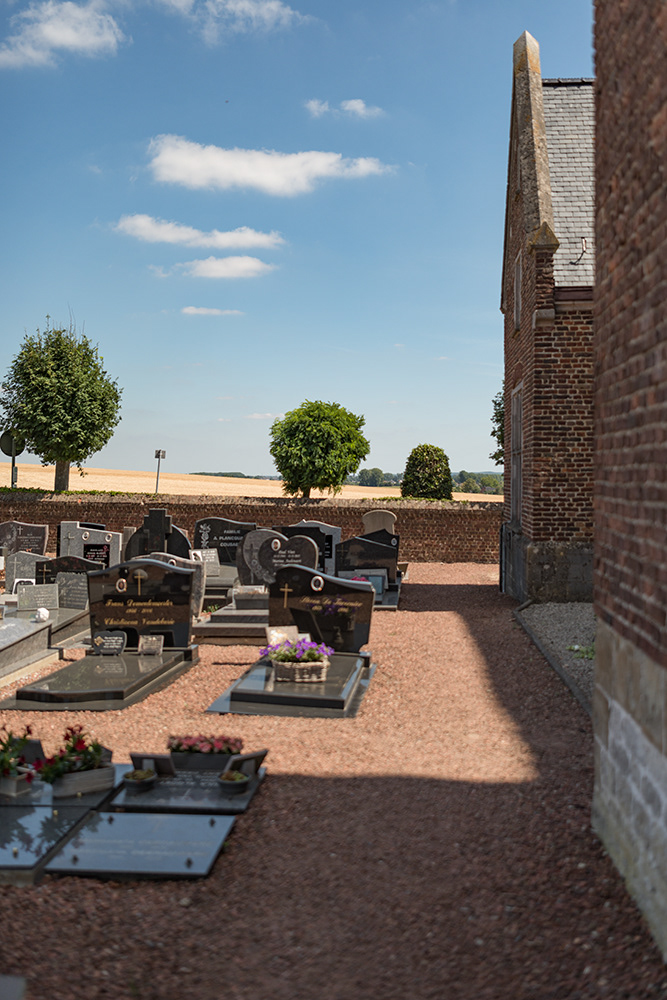 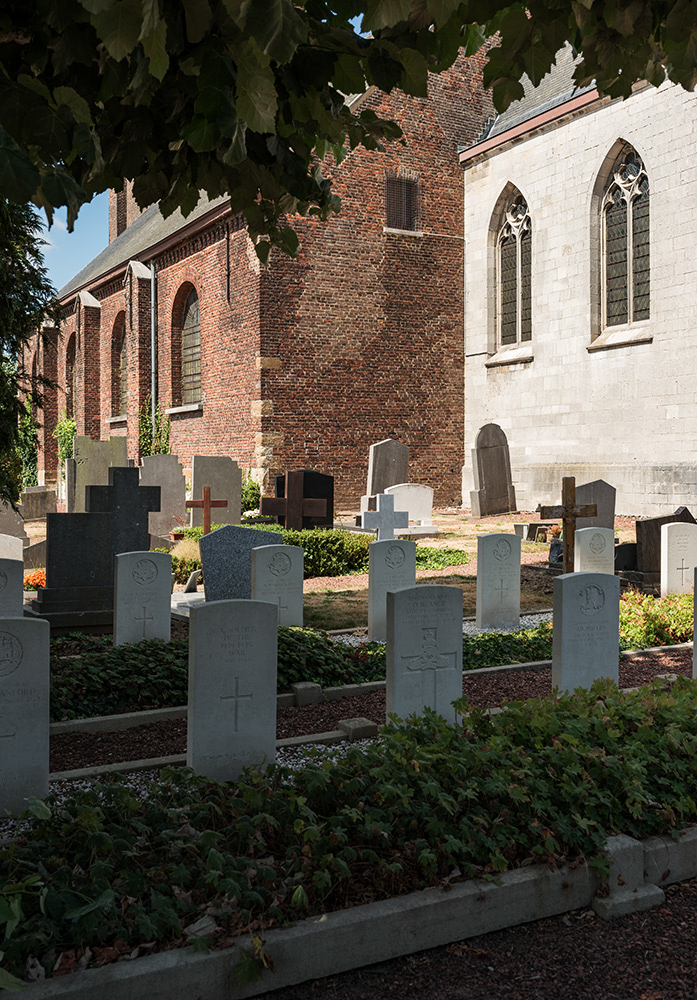 Unwillingly, it made me think of the final scene in The Godfather III: Michael Corleone, sitting in the blistering heat on an old wooden chair in a courtyard of a Sicilian house, alone, looking back into the past, and forcing himself to relive his memories of the people who've left him long ago. Murdered because of all the bad choices he made along the way, having left because of either those same choices or their horrible consequences. A self-imposed punishment, matched in power only by his feelings of guild and regret. Ironically, those memories are also the only things that make the punishment bearable. 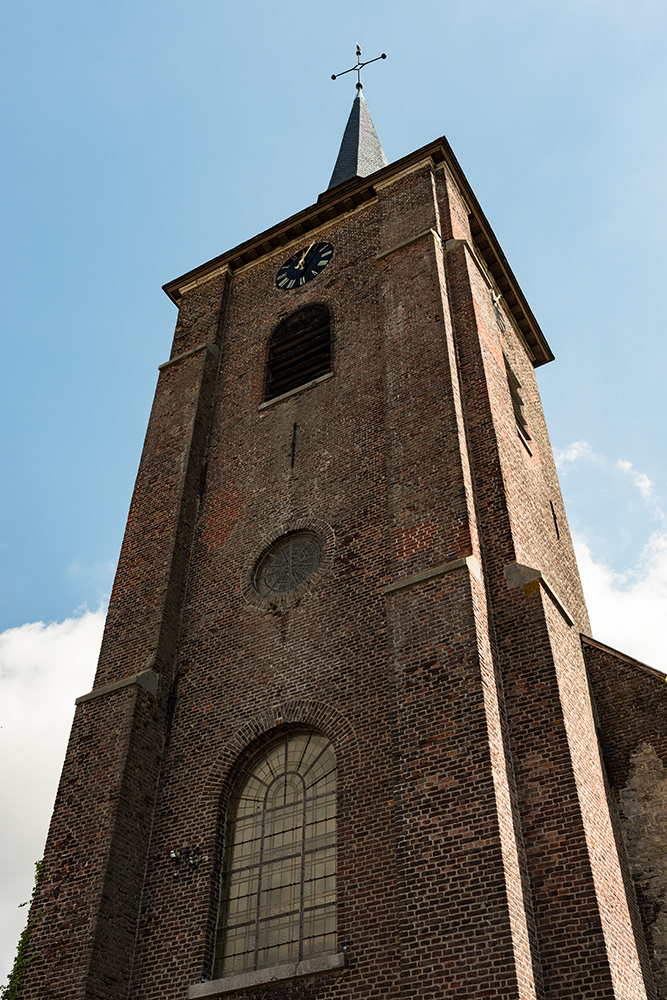 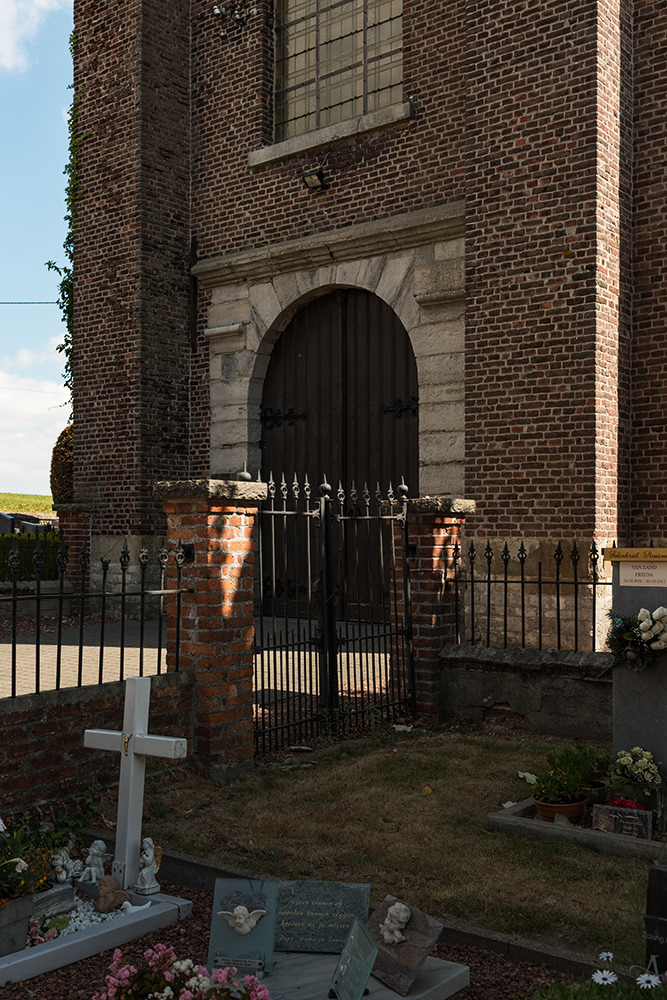 Then, all of a sudden, that which had appeared to be an everlasting and impenetrable shroud of self-inflicted pain for years now, begins to dissolve, making way for acceptance. Not of the wrongs he's caused, but of the fact that finally, death is there, standing before him, waiting. Despite the blinding Mediterranean sun, that's been hurting his eyes from the moment he set foot outside the shelter of the house, only now he puts on his sunglasses, laboriously. With that last act, he turns that former trademark of his, a symbol of emotional distance, of impersonal ruthlessness and defiance, into a symbol of his acceptance. Acceptance of a fate we'll all have to come to terms with at one point or another, a fate that in his case should arguably have come either a lot earlier, or a lot later, but a fate nonetheless that will also end his loneliness, his grief and his guild. Eyes closed, he is ready.
An orange falls from his hands.

Heritage: The pins of yesteryear
↑Back to Top